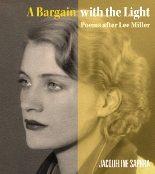 Camera Eye / I, Camera: Brian Docherty considers Jacqueline Saphra’s poem sequence based on remarkable photographs of and by Lee Miller

Christopher Isherwood’s 1939 novel, Goodbye To Berlin, set in 1929, and the source for the Broadway musical, and 1972 film, Cabaret, opens with the narrator claiming

Our reactions could include ‘Voyeurism’, ‘Why is this Art’, ‘People, especially women, being objectified’, ‘What about permission, or subject involvement’, ‘The Camera never lies’. ‘Oh really’, and so on. Isherwood’s model of photography clearly owes more to say, the type of photographs taken by Henri Cartier-Bresson, than to the landscapes of Ansel Adams. We might also note that some of the records issued under the name of Miles Davis, Bitches Brew for example, owe as much to the editorial creativity of producer Teo Macero, than to Davis. (There is a well-known anecdote about Davis walking into Columbia Records office, hearing some music playing, asking ‘What’s that?‘ and being told ‘That’s your new LP, Mr Davis.’) And that’s before we get to relatively simple techniques such as cropping, framing, tinting, re-touching and focussing.

Given that most early photographers were men, Julia Margaret Cameron being a notable exception, there is an immediate issue here, addressed by Laura Mulvey, bell hooks, Lorraine Gamman and others; see for example the British Journal of Photography BJP 7859: Female Gaze. Jacqueline Saphra’s book, the latest in Hercules Press’ exemplary series of publications, addresses some of these concerns in the introductory essay, ‘Lee Miller: Seer and Seen’ by Patricia Allmer, and in Saphra’s Introduction to the poems.

First, a note on the poems themselves, a sequence of 15 sonnets, a crown or corona of sonnets. This is in itself a notable achievement; those of us who write occasional sonnets, and struggle with the form, still the Gold Standard of English verse, can only applaud Saphra’s craft skills. As readers will know, this involves writing, in whatever order, 14 sonnets, then making the 15th sonnets from existing lines from the other 14.

Each of these sonnets is an ekphrastic response to a photograph either by Lee Miller, or of Lee Miller. Six images from Miller’s archives, two of Miller by David Scherman, one self-portrait, one nude portrait by Man Ray, one Miller family group by an unknown photographer, one of Miller and her mother, and two nudes taken by her father Theodore Miller. One of these is of Miller as a seven year old, outdoors in the snow, and another taken by Daddy of the adult Miller. Thought-provoking and disturbing doesn’t get close; what might be the critical or readerly response if the poems here had been written by a male writer?

In the first sonnet,‘Strip’ we find the child Miller,

The next sonnet, responding to Daddy’s adult nude, addresses Miller’s relation to her father,

We move on to a response to an image by Man Ray, its opening the last line of the poem just quoted. Here we see Miller learning to be an artist, specifically a woman artist in 1930s Paris. Then we find ourselves looking at one of Miller’s war photos, this one of Miller in Hitler’s bath, taken by David E. Scherman, Munich, 1945.

Other war photographs included here, by Miller herself, include one of a Bürgermeister’s daughter who had committed suicide, a beaten and traumatised SS guard, a shaven-head woman accused of being a Nazi collaborator, and a group of women in Dachau, part of an enforced camp brothel. This one is in quotes, as voiced by Miller

Miller’s notion of commitment while remaining objective, seems to distance itself from Isherwood’s passivity, and the 14th sonnet, a reading of another image of Miller by David E. Scherman, is worth quoting in full:

As a portrait of the woman artist, and the emotional and psychological price of making art, starting with being her father’s nude model, and going on to act as historical witness to Dachau and other atrocities, this is powerful without being overblown or hectoring. As a writer who engages with artwork in ekphrastic poems, your reviewer is well aware of the challenges involved, and could well imagine looking at any of the photographs in this book, and thinking ‘I can’t do this’ or starting then abandoning this sort of project. Saphra is to be commended for bring this sonnet sequence to such a successful conclusion, and Hercules Press applauded for making a fully considered book, with its informative and thought-provoking essays by Patricia Allmer and Jacqueline Saphra.