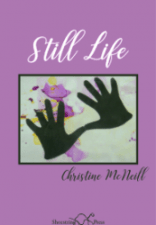 The most significant section of Christine McNeill’s collection Still Life is about the last weeks she spent with her mother assisting her at her deathbed. She remembers her vulnerability and suffering but also her love for life, her joy and the sense of humour her mother maintained till the last moments.

McNeill’s lines have a light touch, full of detailed observations, sustained by a tender tone that expresses a communion of feelings with her dying mother, a symbiosis that lets her be both inside and outside the sorrowful experience.

All is captured in an apparent stillness that has the dynamic of being there, a natura morta that is death in life, agonizing but existing in all its yearning, a seeming immobility. We see this in the first poem where her mother asks for salt on the mashed potatoes (“I want salt before I die”), or the twinkle the daughter notices in her eyes when she brings her a present; or when they cut her nightdress at the back (“not in a perfect straight line / as nothing in life can be”) to slide it over her head, “where it was still living, from the neck up”. Though death is dangerously near, there is still the joy of a smile that

McNeill’s best poems connect abstract ideas of, for example, “sounds of pleasure and distress,/ of passion and grief that life bring” to factual moments when she holds her mother’s head during a haircut; or when she reads to her of “the great terrible love” and fans away a fly on her cheek. These occasions allow the reader to picture the real experience of assisting a dear person dying and at the same time to engage with broader concepts like death and grief, which may be difficult to grasp. A good example is in the poem ‘Close’ that ends the first section, where bearing grief becomes easier when she pictures the Siberian caterpillars that make

The terrifying loss, which will follow the inevitable approaching death, is de-emphasized in the acts of visiting, watching and feeding. Nevertheless, being between life and death is not only a condition that applies during her mother’s final illness, but is an endless suspension ingrained in the human condition:

The four sections of the collection are divided by a blank page, which represents a silent interval to meditate. The second part is about bereavement, how to go through loss and grief and make sense of it. This occurs both in a factual and in an abstract or spiritual way. In the poem ‘Transfiguration’ she presses her mother’s clothes to her heart, feeling her presence “like smoke/from an extinguished candle”. In ‘Bed-Jacket’ she wears her mother’s garment “without fear of death”; it keeps her warm and makes her re-imagine her mother after death in her new being. On the other hand, there are periods of stupor as consequence of grief, when she can “do nothing but look”. But acceptance prevails in the apparently depriving process of getting rid of all the materiality of being (‘Dream me without’) to enter into nature:

Memories of her mother linger on in the rest of the poems, stressing her joyful moments, sensing her in other people she encounters or recalling her first greeting, “here you are”, and tracing her in space while the plane lands in Vienna.

‘Final Image’ delineates the specific perception of a cat, its fur and skin, its “independent spirit” and “pure instinct”, the wish for “being” in a definite way, while, at the same time, wanting to “go with the flow of air”. This poem demonstrates very well McNeill’s ability to merge factual and abstract, tactile sensations and transcendence in her compelling lines.