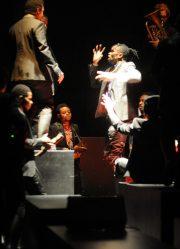 The title Requiem pour L., if spoken aloud, translates as Requiem for her.  Who is the anonymous woman that we see dying onscreen as Mozart’s Requiem in D minor, K. 626?  We are not to know her identity.  All that is revealed is that she was a friend of Platel.  L. is a kind of Everywoman whose presence makes us confront mortality itself.

The evening may upset some because, watching a film of a woman slowly dying, is provocative.  In the same way, this new interpretation of Mozart’s Requiem may disturb purists.  Added to this there is the question of those who come to Platel to see his dance.  There is very little.  This is an imaginative performance that creates its own performance aesthetic and although it is informed by Mozart it takes his Requiem into a new staging where voice, percussion, electric guitar, drum, accordion and euphonium play over the memory of Mozart’s original.

Although Mozart is the impulse and reference Cassol adds influences from pygmy, Indian and Malian musical traditions.  This means that, just when Mozart’s original is recognisable, the music appears to morph into a modern riff.  Mass choral singing has been replaced by individual voices.  This makes for a series of solos that sometimes inform one another rather than expressing the weight of a whole community.

There are texts in Latin, Lingala, Swahili with moments of Tshibula and Kikongo.  The singers are outstanding and they bring with them cultural heritages which overlay the Requiem.  Under Rodriguez Vangama’s poignant direction the team features musicians and singers who are mainly from the Republic of Congo.  Bouton Kalanda , Kojack Kossakamwe, Silva Makengo, Boule Mpanya, Erick Ngoya, Russell Tshiebua and Fredy Massamba.  Talent is also represented by South Africans Stephen Diaz, Owen Metsileng and Nobulumko Mngxekeza.  But these cultural layers are even more complex as they include the impulses of Portuguese accordionist João Barradas working in concert with the Belgian musicians Michel Seba and Niels Van Heertum as well as the Brazilian Rodrigo Ferreira.

Is this a European work?  Is it African?  Does it matter?  The very form of this exciting Requiem questions the way we ghettoise music and people.  It emphasises that we are all united in death.  Platel has designed the production within a Jewish graveyard where flat tombs receive stones from visiting mourners.

For those expecting dance there is a final moment of celebration when all artists are choreographed in a wild wave of continual sung-movement.  They dance, on isolated spots in the cemetery and many performers are seated.  These movements are isolated but, as a result of the energy, discipline and ensemble work, they are experienced as dynamically connected.  Requiem pour L. is a deeply philosophical work that translates our anxieties about mortality into art and which poignantly offers a glorification of the lives and deaths that we cannot control.