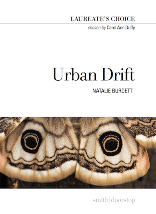 Natalie Burdett’s pamphlet is a ‘Laureate’s Choice’, perhaps both blessed and burdened with that honour. Hard not to interrogate it for signs of what might have appealed to Duffy’s ear, or to question whether the work stands up with or without such a recommendation (I soon decided that it does just that).

‘Perceptive’ and ‘scrupulous’ were words that kept coming to my mind as I read through Burdett’s poems. Her language is precise, her imagery carefully grounded in the urban contexts that give life to the collection. She inducts the reader into this world via a sequence based on Manchester ‘Bridges’, a piece which gives a good sense of the ways in which these poems work. The idea of ‘bridge’ as metaphor for a relationship and its break-up might not be startlingly new, but Burdett tells the story and extends the metaphor across three poems with admirable clarity and restraint. What is witheld is as important as what is delineated, as in these lines from the middle poem of the three:

I have the sense that with minimal fuss, this small sequence arrives exactly where it needs to go.

The central theme of ‘urban drift’ refers in most of the poems to the North West of England or the West Mid-lands. Ideas about heritage, urban decay and regeneration inform descriptive poems in which the narrator is a kind of flâneuse of empty spaces and in-between landscapes. This works best for me where reserve is unbstrusively undercut by feeling, for instance the ambivalent experience of ‘moving away’ in ‘Boundaries’ . As in quite a few of the poems, the poet writes in first person plural; she is in there with the crowd, fully identified with her home town:

A pleasure that poems like this one offer, is Burdett’s sharp observation of local detail, often subtly ironic but never overdone. I liked for instance the steel benches “covered in thick amenity-green paint”. However the poem ends on the painful need to move away,

I also particuarly liked ‘The Soy Sauce Fish’, that little commonplace of take-away sushi given a helping of metamorphosis, skilfully transformed “bubble intact, spirit-level straight” and then reconnected to “where the salt’s external”.

I enjoyed ‘Bobhowler’, (a West Midlands term for a large moth), which reminded me of Liz Berry’s poem of the same title.The fact that the same image of the bobhowler’s beautiful wings appears on the cover of ‘Uban Drift’ and also on the Radio 4 site where Berry reads her poem suggests that Burdett’s poem may be knowingly referencing Berry – or perhaps both poets happened upon memories of this lovely half-forgotten word at around the same time. Burdett traces it to her grandfather. Like Berry, her poems evoke towns and cities of the West Midlands and contain traces of local dialect, but worn more lightly, or held at more of a distance. And Burdett’s moth is somehow less unearthly than Berry’s, although it is both a creature of “glorious mothy grace” and something more sinister, reminiscent of “a grey Chinook” emitting a “low stealth-hum”.

As in many debut pamphlets, Urban Drift displays a variety of layout and form. Of course this is a matter of poetic taste, but I found the more experimental, impressionistic poems the least interesting. ‘Crow Flight (Oldbury)’ for instance describes a stretch of polluted canal near Dudley in bursts of words and phrases that do suggest the drift and flow of flotsam (and so of history), but for me the poem doesn’t go far beyond dscription, especially when compared to the acuity of others in the collection. Perhaps it works best when performed aloud. In ‘Out of Darkness Cometh Light’ an account of a train journey contains a similar passage where one long descriptive sentence, laid out as a section of prose poetry, mimics the view from the train. But it’s the moment where the poem reverts to more conventional lineation where I felt moved, pleased to return to the tension between poet and setting, a delicate sense of affection and longing:

The form that seems to me to be emerging as Burdett’s very own is more focused and assured. The best poems here wear their originality quietly. Many make good use of end-stopped lines or stanzas to afford a taut, transient touch. ‘Berlin Talisman’ is a good example, chronicling a friendship or relationship and then perhaps its fading away. The gift of a “vintage plastic bird brooch” is given temporary life “singing brightly from a nest of tat”, then is eventually lost after “moving city”. For me, the clipped lines say a great deal about the fragility of the brooch, both precious and tatty; the form is working beautifully to suggest feelings that flare and are left behind as life moves on.

As the sequence comes to an end, the theme of urban drift and decay is softened by poems that speak of resilience, both of the landscape and of its inhabitants. In ‘Bethesda’, at the spooky site of an abandoned hospital, the poet’s companion “feels safe here, closest to her ‘taid ‘” (another dialect word, for grandfather), and the enduring stones of the hillside seem to offer reassurance.

The final poems signal hope for the future: there are sightings of bird species,

This is a very enjoyable debut, written with verve and commitment; I’m looking forward already to what may come next.