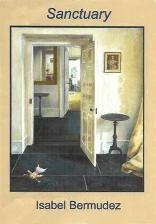 Isabel Bermudez’ poems come from a world of bees, dung beetles and wrens, as well as Oxford Circus and the Croydon tram. The aesthetic is of mild revelations in familiar places. Recalling the Hertfordshire Company, one of the many ‘pals’ groups that enlisted and died together in World War One, she writes:

Making the familiar strange is, of course, one of the tasks of poetry, and a more delicate one than might be imagined. The familiar may stay just that, and become banal; while too much strangeness distracts from the poem’s meaning.

One way to bridge the two is to change the subject, the apparently new topic illuminating the old. In the best poems here, Isabel Bermudez achieves that seamlessly. ‘Poinsettia’ starts with a hesitation in speech, a distractedness:

And then, in the next stanza, we are with this woman’s grandmother, surreptitiously taking cuttings, and from there, starkly,

Arguably the poem might end there, rather than stating the loss of memory. The desire to explain can mark a lack of trust in the connections and resonances of the poem.

Where Bermudez lets her imagination free, the results can be startling and satisfying. The moon becomes a drunk, out on Temporary Release – “he wanders the skies in his pyjamas” – but settles into a past of building work, concisely conjured. (‘Moon’). Following the satnav through South London in the dark, poet and driver find themselves in Camberwell Cemetery – “You have reached your final destination” – where