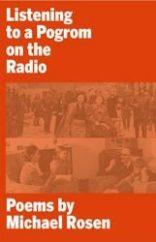 In this the collection, the poet gives a voice to the voiceless in society. He exposes the prejudices of the media and follies of the ruling classes. In this way the poet sees his role akin to Shelley’s “unacknowledged legislators of the world”. In the poem ‘Migrant Poetry’ Rosen reinforces poetry’s place in society with the words ‘’Poetry is the witness: it notices’. Thus, we are given a “condition of England” collection that is at times bleak in its honesty. Yes, the standpoint is clearly left wing, but the reader must acknowledge there are truths revealed in these poems which, whilst dealing with strong subjects that affect us all, are also crafted in original and entertaining ways from fables to diatribes.

Broadly the poet examines the role of the media in stirring up prejudice against those who are perceived as undesirables; he then focuses his polemic on the state of the education system; finally, his anger is turned on cynical politicians who, with cuts to services and restricted welfare, seem to supress ordinary people.

The ‘program’ in the title, we soon learn, does not just refer to the prejudice whipped up by the Tory media towards refugees seeking safety in the UK but is also used to incorporate the white working class and those on benefits. Essentially it is suggested that propaganda in the form of hysterical headlines and politicians’ sound bites are used to brainwash a country into believing that these “others” are responsible for all the ills of the country. Not only does the collection speak up for this silent minority, but at times it challenges us to consider that we may all harbour prejudices to some degree.

There are many and varied characters in the collection. This serves to maintain interest but also reinforces the idea of individual confusion and disconnect – a pervading sense of people not knowing who to believe. In the title poem, the character has been listening to the Tory party conference on the radio. His /her response reveals the extent to which politicians can manipulate facts and confuse the electorate to their own ends. The poem takes the form of a list issued by the party, of who to fear in society, a clever political trope that deflects blame onto “others”. The message incites fears ranging from the people next door to the student on the bus; but at the same time suggests that we can put our faith in “those running banks”. End rhyme is deployed well here to reinforce the cynical intentions particularly

The poem, with its “worried” narrator, suggests a government that thrives on creating paranoia amongst its citizens. What is unnerving is the way propaganda is so smoothly used by governments and the media to manipulate our thoughts. The poem ‘Concerns about Immigration’ deals with this concept more explicitly. We are shown how right-wing media and government are in cahoots, diverting the electorate’s anger and fear away from themselves as originators and supporters of welfare and service cuts, placing the blame on the soft target, immigrants. This effective poem uses the refrain “people are expressing concerns about immigration” to reinforce this sense of brain washing propagated by a government which in turn cynically “laughs quietly to itself”.

Rosen reveals here that whilst we do not live in explicitly ideologically times we should not underestimate the media and government who take the crude tools of dictatorships and deploy them in subtler ways. This is implied in the gentler poems focusing upon the narrator’s family who, as Jewish émigrés, escaped Germany to make a new life here. These images of a warm family serve to humanise refugees. It is too easy to vilify a collective, anonymous concept of immigrants; but when presented as individuals they become humanised, personal. These poems also serve as a reminder that the UK has a history of welcoming refugees which now seems to be forgotten.

The poet then turns his attention to the state of education in this country. The poems skilfully employ repetition and black humour to present the subject matter from different perspectives. Successive governments’ obsession with restricting, doctoring and generally ruining the curriculum is examined with authority. The aim, we see, is to create an education system simply to get pupils to pass exams, thereby making education quantifiable. Dickens’ Hard Times springs to mind here as we are shown a system that is reductive and dry, based on the accumulation of facts over independent thought and imagination. This is best seen in the poem the ‘Expected Level’. This comprises a litany of what governments consider as undesirable in education – which includes everything from the encouragement of empathy to exercise of imagination. Each list begins with the word ‘If’ which is vaguely reminiscent of Kipling’s poem. The line then subverts the concept of what education should be if it were aimed at creating rounded individuals. Thus we have “if you can write and make people cry, remember, it’s not enough”. The repetition of “it’s not enough” again hints at a government driving home dogma. The second section of the poem, beginning with the dreaded word “But”, suggests that the correct use of punctuation is what counts as good education, being quantifiable. The end line “over and repeatedly” replicates the boredom of such lessons that must switch children off English from an early age.

One of the most telling challenges to the dryness of current education lies in the poem ‘Listen up’ with its refrain “listen up students, only study what you know will get you a job” which implies humanity-based subjects such as art, and music that enhance life should be cast aside as irrelevant. The whole exam system, which begins testing children from an early age, is excellently satirised in ‘Alice under the Floorboards’. It is inspired by new work by Caroll, allegedly discovered under the flooring of a room in Christchurch college. It becomes a vehicle for Rosen to brilliantly critique the current education system. The poet skilfully takes on the idiom and style of the original work with Alice encountering a host of preposterous characters who all have some basis in fact – for example The Blue Queen. The piece is witty and, by creating new characters such as the “Gibblet”, it exposes the sheer nonsense of current education policy. Again, Rosen makes fine use of style to both entertain the reader but also drive his points home.

In the final poems of this section, teachers join the government’s hitlist of those to blame for the country’s problems. It is no surprise that in a system that prescribes how and what to teach, teachers themselves find the profession dull. Moreover, vilification by government and heavy work loads are revealed in the aptly titled ‘How to Guarantee Teacher Shortages’. This culminates in ‘Lets Franchise Schools’ a poem that examines ways in which, much like the NHS, education is being outsourced to non-teachers and run like a business.

A common theme running through the collection is criticism of politicians who use charm, charisma, smoothness of image and voice to get away with manipulating facts to their own ends. Tony Blair is evoked as example here, the persona pondering on the former leader’s half -truths that took us to war. On the domestic front, characters are angered by the attacks on public services and the welfare state. A major concern is the depletion of the NHS which seems more ideological than economical. Jeremy Hunt comes to represent all that is feckless about modern politicians. ‘The Jeremy Hunt Book of Wisdom’ (an obvious misnomer) again uses repetition to drive home a message. The poem comprises a series of ridiculous suggestions for improving the NHS which only serve to damn both minister and government. It is a list that could just as well belong in the ridiculous world of ‘Alice’. The statements become more and more outrageous. It begins with “Jeremy Hunt says that people should improve their bandaging skills by watching the curse of the mummy’s tomb”. The effect is to make readers laugh but also shake their heads in despair. Moreover, much like education, the government is shown here to undermine professional judgements – in this case taking on doctors and nurses. Again, whilst the style and content are extreme, its satirical message will ring true, I feel, with all readers who have been at the sharp end of NHS cuts. The anger is appropriate: think, for instance, of William Blake in ‘Songs of Innocence and Experience.’

Contrasting with the portrayal of slickness of contemporary politicians are a handful of poems focusing upon Jeremy Corbyn who would seem to be the antitheses of such glibness. The poems do not espouse his politics explicitly rather they take an interesting perspective, focusing on ways in which the right-wing media have sought to defame him. He is of course presented as extreme left wing, with the “S word” socialism deployed like a crime. But I particularly like the poem ‘How Corbyn lost Oldham’ which focuses not on the leader’s policies rather the presses obsession with his image and a certain jumper. Thus, we see how the media favours the men in suits over a leader who perhaps prefers to concentrate on ideals rather than smooth style. Corbyn, it would seem, has the media rattled especially post the 2017 election where he had previously been written off. The narrator of ‘Corbyn Wins Leadership Vote’ sums up with relish: “I loved that moment when the commentator said that Jeremy Corbyn had won the contest in spite of his radical politics” .

These political poems increasingly deal with the divide between rich and poor in society and indeed the rest of the world. This divide is revealed in ‘Money’ as governments that allow great wealth to go unchecked by tax or regulation. In ‘Message from a Helpful Rich Person’ the narrator’s cold, clinical voice seeks to persuade ordinary people of the virtues of low wages and cuts. What emerges in these poems is an almost Victorian disconnect between rich and poor – a divide that cannot be breached in a country of limited social mobility.

The collection gives us a dystopic vision; but behind the left-wing stance are truths we can all relate to. It is a polemic, but it is also entertaining in terms of style and black humour, all of which sweetens its bitter message and makes it eminently readable. These are opinions and observations that deserve to be heard.