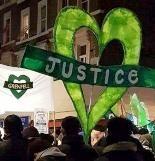 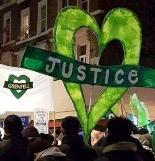 I started thinking about an anthology of poems responding to the Grenfell Tower atrocity early in July 2017, on the grounds that such poems were surely being written and might have more impact when published together.  Without pausing to obtain advance interest from a publisher I decided to proceed on hope alone and began sending out a call for poems up to 50 lines long and in any language, with a deadline of 15 September 2017 and a hypothetical publication date of the end of December.

Publicizing the project with zero funding was very difficult, because there is no commonly shared source for such information in Britain. I told the Poetry Library, probably too late, and collected emails from the Poetry Society and Poetry Business websites to add to those I already knew from my life as a poet and (former) poetry organizer. I posted the call beside other announcements near Grenfell memorial walls and in cafés etc. around Portobello Road, and one of the contributors, who works for a local courier firm, rallied workmates to distribute it more effectively. I also set up a FaceBook page. Apart from informing Poetry in Translation, however, it was virtually impossible to reach poets writing in minority languages. I simply didn’t have time to send out the call even in the handful of languages I know myself, and had no idea where to send it anyway. In the end we received poems in Amharic, French, German, Italian and Korean, and accepted four of them with translations.

About 300 poets in several countries submitted 346 poems. The numbers were around my lower estimate and thus rather disappointing. Doubtless excellent poems were not submitted because their authors never received the call.

Poems which went significantly over the 50-line limit were disqualified, so that no contributor would take more than two pages (or have more than one poem). I compiled the rest into a common font and removed the authors’ names. They were then sent in batches to a small group of reviewers with a request to grade them as Yes, Maybe, or No, with, if possible, further grading inside those categories. The panel met in early October 2017, learned who the authors were – sometimes with surprise or disappointment – then compared their gradings, and agreed on a selection. One especially difficult, though understandable, aspect was the repetitive content of many submissions. We tried to choose the best taking a certain approach, but a rejected author is unlikely to accept that their version is not just as good as the one/s we chose. We accepted about 17% of submissions (i.e. 61 poems) and contributors include the former head of the local nursery school, an Ethiopian exile who lost many of his neighbours in the disaster, a Big Issue seller who plays in the local steelband, and a firefighter who attended the inferno of June 14th.

The idea of presenting the dedication in some of the 300+ languages that are spoken in London came very early on, when I decided to call for poems in any language. The necessary translations of the dedication were a considerable challenge, which was met with the aid of contributors and their workmates, and of people on Facebook, together with input from a translingual poetry project of my own. A linguistics expert is currently working on the necessary typography.

I arranged the poems under themes in order to construct a sequence for the book. At the same time I raised various editorial queries with authors, and they in turn let me know what they wanted in terms of layout etc. This meant that when it came time for typesetting I was able to keep an eye on matters of format, though in a few cases I had mislaid fundamental elements which had to be restored via feedback from the poets.

At an early stage of the project people started asking Lenin’s favourite question, namely where the money would go?  After considering several options and consulting the local community, poets and publisher decided to donate the royalties to Grenfell United. At their request however the money will actually go to the Grenfell Foundation, which they are setting up to accept such donations and use them for the benefit of the community.

I arranged to get a foreword from a local source, but it turned out that the person concerned was  still too overwhelmed by the Grenfell disaster and its consequences to complete the task. When I wrote to David Lammy, MP, who lost a close friend in the fire, his office replied in the affirmative within 15 minutes and the text was delivered on time.

The first publisher I approached accepted the book in principle, but it became clear that their two-stage operational style (in which the author first completes a text and then the publisher takes it over and produces a book, with neither having any role in the other’s sphere) was not suitable for Poems for Grenfell Tower. No contract having been finalised, I withdrew the book and went the rounds of other houses. Several responded positively but were already so committed that they could not produce the book in 2018. At last one of our contributors recommended Mathew Staunton’ s Onslaught Press. We hit it off immediately, with the added advantage that we are both based in Oxford, one of the world’s great book factories; and now the rest is trying to become history.

Poems for Grenfell Tower will be published at Easter and launched first at the Harrow Club near Grenfell Tower at 14:30 on Sunday 15th April and then at the Seven Dials Club in Covent Garden at 19:30 on Friday 27th April. Music will be provided by Robb Johnson, Nostalgia Steelband, Rihab Azar, and RAKA. (My attempts to find a larger venue at City Hall or a London university had fallen on deaf ears.)

Unusually for such an anthology, contributors are preparing further events with the same commitment to take place across Britain between May and September. We hope that poets not in the book will join us to continue and strengthen the response of artists to the Grenfell atrocity, which has been building ever since the tragedy occurred. Wherever possible, Grenfell poetry events will have free admission with a collection for Grenfell United. Our press officer, Tom McColl, will issue press releases and arrange interviews with poets as requested. Updates on the project can be found on the Facebook site https://www.facebook.com/grenfellpoems/

In retrospect, I should have set a longer period for submissions, not just because it was so hard to tell people about the project, but also because publication in 2017 would have been insensitive, in view of the level of trauma in North Kensington – a factor which I have only come to appreciate fully after several visits.  A publication date about halfway between the commemoration at St Paul’s and the anniversary in June 2018 is more appropriate.

As a foretaste, the following poem will appear as the book’s preface:

So, pull down the monument of Britain’s shame?
It’s not enough. The horror and the grief
May some day ease; insomnia and strain
Give ground before the impetus of life.
And perhaps the dead have other things in mind
Than Grenfell Night, more practical concerns…
But years will not dispel the stench of crime.
The cremated steel and concrete ghost will scorn
Mere demolition; rather, persevere
For children’s children’s schoolchildren to read
And wonder, with stilled hands and hidden care,
At how their ancestors were torched for greed,
But then the neighbourhood rose up through fire
To stand together, one with Grenfell Tower.

Rip Bulkeley is an award-winning Antarctic historian and the founder, in 1999, of Oxford’s thriving Back Room Poets. His collection War Times was published by Ripostes in 2003.

London Grip Poetry Review – Topping A Review of Love in the City – An Experiment from the Last Days of Neorealism, by Jane McChrystal.