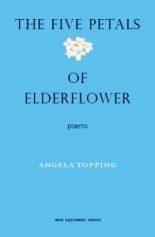 Angela Topping’s latest collection is a plangent mediation on nature – its intricacies and beauty, but also its darker side, the ruin of ageing and the inevitability of loss, death and decay. It is beautifully shaped (as, incidentally, is the physical book itself, a pleasing eggshell blue, simply and crisply designed) – beginning in the full bloom of nature, pulling in to a focus on the dense, metallic experience of life in an industrial world, then pulling out again to an altered natural world of loss, disconnection, even sadness. It works as a kind of tide, each poem pushing you up the sand in its own direction, before the next tugs you back. At each stage the reader is half-conscious of this movement while absorbed in the work itself. In such a concise volume (42 poems over around 50 pages), such subtle architecture is an achievement in itself.

It begins with the elderflower in a five-part title sequence, the reader “at one with lace”, entranced by “thinner wands / of stalks, and cobbly lace of blossom like slubbed silk”, walking a lane which “becomes a funnel of scents and fuzzy leaves”, listening to “its saxophone voice … above twanged strings / of cello and double bass, holding the melody / as it flies high”. Each part is small and precise, adding a new joyful aspect – smell, the shift of light, a musical conceit – until the whole concludes, unexpectedly, in melancholy: “By these things, I swear to remember you.”

It is not a gloomy vision, but one which highlights the yoking together of growth and decline, light and shade. It is similar in many ways to Topping’s signature style – the incremental development of a theme in clean, unassuming language (where a word is never wasted, but equally, is never flashy) until the time comes to break the calm, allowing an urgent, startling note to upset the poem’s gradual development and brand itself on the mind. A perfect example comes in the poem ‘Fish and Chips’. First, the scene-setter, reassuring in its solidity:

We see the fish, plain and solid in their element (with perhaps a bit of cheeky life – that “salty”), and are set to enjoy a slice of homely nostalgia: food as access to memory, social history, geographic precision the signpost to that other country. But then, halfway through, come the mushy peas, and the poem explodes into something else:

Nothing has prepared us for the startling turn – a punch of medical terminology, cold amidst a mass of sibilance; the yanking of comfort and nostalgia into another register altogether. Instead the remainder of the poem (indeed, the first section in retrospect also) appears in a new light: food memories are no longer nostalgic, “all the comfort we need”, but a brisk kind of medicine, healing while its shocks, with the recollection of the past an access point not for comfort-blankets but spiky truths. It is a technique the poet deploys a number of times, achieving greater impact with each.

In ‘Are You Sitting Comfortably?’ the poet is jolted from a crisp, commanding RP world to a Mersey soundscape awash with life:

And interestingly, in ‘Spoken Cartography’, she reveals her thesis (spelled out in the final line, “nothing is definite except the dark”) in the first stanza, only to use the next two verses, on love and the wonderful emptiness of sky, to strike against it like stone on flint:

In the middle poems – ‘My Own Address’, ‘They Pose Together’, ‘New Year’ – there is a feeling of spareness counterpointing the dense, lived experience of life in our industrial century. Where in dealing with landscapes, both literal and those of the mind, Topping finds truth in the whole picture, fully embroidered, when she touches on city life she addresses the perpetual interplay of light and dark more glancingly: “Rime freezes mittens on the bridge rail”; “At her throat/squats a cameo”. In ‘How to Capture a Poem’ this approach becomes explicit:

It is as if poetry itself, a thing of glances and half-seen angles, can emerge only through the pores in this suffocating world. Contrast such sentiment with lines from the poem that ends the volume, ‘Against the Dark’: “This bowl of hills, these singing stones / that circle round about: protect / my midnight flesh and bones”. Back in the country we are liberated, aware of the dark but charged with its vitality. Topping never comes out and states things, but in the clean, gradual wash of the book’s tides, we realise where she wishes to take us, and for all its quietness, it is in the end a revealing place: