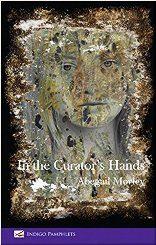 This is an extraordinary collection. Abegail Morley’s graceful, mysterious and at times terrifying poems haunt me and won’t let go. It is in their nature to be hard to describe; to me, they are ‘negative capability’ stretched to its limits.

There is a central theme of ‘curation’; the poems could be read as a curated ‘body’, as in ‘Fonds’, early in the collection. But what is this body? On one level, the lines speak of a museum archive, in that sense a body of evidence, a collation of traces of the past. But although (in ‘The Depository’) ‘at its darkest point, nothing shifts’, this body is very much undead. There is a gathering sense of dispute over the ownership of the body, whose parameters are uncertain. Characters, artefacts and written records are given voice and express their resistance. Even a watermark can yearn for release.

A battle for definitions and control is being played out. The depository is a place of keeping, but poem after poem raises the question of who or what it is that binds, and who or what is bound. Can we hold and preserve the past, or does the past itself hold captive and control those living in the present?

At times, the curated items are distressingly human and the curator morphs into jailor or even, moving dee-per into ‘the howling dark’, something akin to a dungeon-keeper. Boundaries loosen between books and bodily relics.

The sinister figure of the curator (and of other characters identified as men) recurs both in third- and first-person. His powers are at times terrifying.

At other moments, he is troubled by the ‘inky voices’ of his captives, who hover restlessly in the archives, ‘shadows pausing and unpausing themselves’, wonders ‘why I didn’t let them leave’. Although this is not necessarily the case in every poem, many of the characters ‘he’ curates are identified as women; the place is full of female voices crying out for release, and in this sense Morley offers glimpses into vertiginous depths of fear about power relations between men and women.

Other voices are woven into the mix: in ‘Chronicles’, there is a boy obsessed with his run-away sister (for me this evoked memories of the Beatles’ “She’s Leaving Home’, but with a sinister twist); in ‘Occupied (in B&W)’, a woman seen on a bus (possibly in one of the curated photographs) turns out to have worked for the French Resistance broadcasting station, Radio Londres. ‘Navigating the Annals’ moves into slightly more familiar territory – just an old man ‘with tired hands’, perhaps lost in time, whose fingers explore the wallpaper,

I’ve returned many times to one poem in particular: ‘The Bone Creaser.’ Centred on an archaic instrument used to crease and fold paper before stitching it into a book, this poem is as unfathomable and troubling as any in the collection. The language is beautiful in its clarity and economy. It is unclear to me whether the narrator is describing a coersive sexual act using the imagery of book-binding, or vice-versa. Coersive book-bindng would certainly be a possibility in the context of this collection, and in that context I think there is little difference. There is a woman, a (male?) narrator, and there is a book. The creaser, carved from bone, reminds the narrator of ‘the rise of her ribs.’ The narrator speaks seemingly tenderly of falling ‘into the shaft of her body’, and erotically of ‘dimples spread beneath my fingers’, but this entering is the action of a scalpel (‘I…slit open the weave’…) and finally the narrator, the sexual act and the desire to possess become identified with the process of stitching the book, in a final two lines that made me shiver:

If all this sounds like a descent into a very dark place, it certainly is that. But I found light, joy even, in Morley’s exploration of the language of archiving. If like me, you are a fan of the stationery cupboard, these poems will feed your obsession. Bindings are here, and a metal-edged Hollinger box, foxed pages, the glassine envelope. I wish I’d been the poet to discover the ‘cut flush’, a type of folder with a name made for metaphor. Moving into PItt Rivers territory, (or even Star wars, perhaps), there’s a holographic embryo in a bell jar. Morley uses these containers as powerful images of confinement, evasion and eventually, escape.

And this is another joy. Throughout the collection, there’s an exquisite sense of unity and purpose; each poem is fresh and unique, and yet they build up to much more than the sum of the parts. And the stories move toward a conclusion. The final poem is in the voice of the curator, pathetic now, reduced to writing down the numbers of cars passing by on the London Orbital,

And something else has ‘hatched’, too:

I would not want to suggest that there is a ‘happy ending’ exactly; Morley poses questions with no easy answers. In the underworld she has created, anything that seems to settle might spring up to defy definition, like the woman in a footnote:

At every turn, this book unsettles even as it delights. I would describe ‘In the Curator’s Hands’ as essential reading for anyone interested in contemporary poetry.