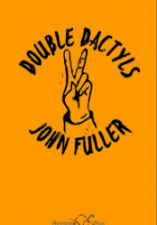 Light verse is not to be undertaken lightly. There is no room for anything less than perfection in the fine balance of subject and form, so it is only for poetry’s grown-ups. John Fuller is one of these, with over twenty poetry collections and, significantly, critical works on W.H.Auden in his bibliography. The double dactyl is a tight and addictive form and to find thirty-eight of them gathered together in one place and for them to be by a perfectionist has been a happy start to the New Year.

If you are unfamiliar with the form it’s best to start with an example – rules and history can follow, after this example from Fuller’s collection:

It looks and sounds so simple, as though it arrived fully-developed and with no effort on the poet’s part. That’s Fuller’s art; he knows the form and how to make it work. A double dactyl is always biographical, with the name filling the second line. The first line is rhyming nonsense – though there’s room for some variety here. The eight lines are split into two end-stopped stanzas, and in each stanza the first three lines are double dactyls while the fourth is a choriamb. The fourth and the eighth lines rhyme. Read the example aloud and, for good or ill, your brain will hold the pattern. Remember, double dactyls can be habit-forming.

The starting point has to be the name of the subject and this is self-limiting: not every name is double-dactyl in form. Titles can be handy, as can middle names; Fuller has subjects as diverse as Jesus of Nazareth, Samuel Coleridge, Cardinal Richelieu, Gilbert Keith Chesterton, President Kennedy, Vladimir Nabokov. Playing with nonsense until he can find an appropriate first line is evidently an appealing pastime – some, taken at random, are Sniggery-whiggery, Niminy-piminy, Oompa-pah, oompa-pah. How the biographical details fit is a matter of personal taste: they can be factual or richly inventive; they may include some words spoken by the subject. Finally, line 5 must be a six-syllable word – and a double dactyl. Some examples, all from Fuller: Neuropathology, Marketability, Epigrammatical, Thalassophobia.

Enough of the rules and constraints: this is a playful form, for entertainment of both poet and reader, and the bounce of the rhythm plus the two-stanza constraint keeps it on the light side, even where the comment is critically sharp – as here:

The pamphlet’s back cover outlines the history of the form (invented by Anthony Hecht and Paul Pascal in 1951) and introduced to readers in Hecht and John Hollander’s collection Jiggery-Pokery: a compendium of double-dactyls (New York, Atheneum) in 1967. That collection was dedicated to W.H.Auden, who had used a dactylic patter-song in his libretto for Paul Bunyan; and this Shoestring Press collection is published as a fiftieth anniversary tribute to both the form and the poets who had promoted it so widely. However, Poetry doesn’t stand still. Through the natural process of poetic evolution the double dactyl form has also morphed – in the USA, at least – into the McWhirtle, a slightly looser version of the original, where an extra syllable allows for more flexibility, though a purist would mourn the loss of the six-syllable word in the second stanza.

As Fuller’s cover shows, it’s a form that puts up two fingers to deference. Settling on a favourite is near-impossible, although at the moment I’d choose the one that manages a side-swipe at three poets at once

Those of us who like this sort of thing will find this the sort of collection we like very much. As I said earlier, it can be addictive. It starts innocently enough with collecting likely names – Hans Christian Anderson, for example, or Alfred, Lord Tennyson. It expands into a more than passing interest in six-syllable double dactyl words. After that, it’s only a step away from a first shot – and you’ve joined a small and select group of addicts.

Thirty-eight poems, three to a page, present a logistic problem in how to best use the layout in the pamphlet, and at first there seemed too many empty pages at the end. I wonder, though, if that wasn’t deliberate. After all, this is a very addictive form.

John Fuller has dedicated this collection to the memory of Hecht and Hollander, whom he describes as ‘poets of wit and generosity’. I’d include him in that description; this collection lifts the spirit.