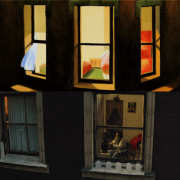 I expected this to be an exhibition focusing on the links between art and T.S Eliot.  Journeys with ‘The Waste Land’s is however something more unique.  It is an exhibition that focuses purely on this extraordinary poem with all its contexts, voices and virtuosity.  Broadly the exhibits introduce us to Eliot the poet, the contextual influences of the text and the meanings behind the poem.

There is, we learn, a contextual link to a section of this long poem.  Eliot in 1921 having suffered a nervous health condition was recommended by his first wife Vivienne to recuperate in the seaside resort.  It was here whilst still working on the poem that he wrote some of its most seminal lines.

‘’On Margate Sands.
I can connect nothing with nothing’’

Just how much of the poem was written in Margate is debateable but we are shown provenance by way of a letter to a friend, Sidney Schiff that Eliot was working on the third section of the poem whilst recuperating in the seaside town.  This testimonial is built on by the charming anecdote that these seminal lines where conceived in a shelter, still in situ, overlooking the sands.

The amount of work accomplished in Margate becomes irrelevant since these lines are arguably some of the most memorable and their meaning comes to underpin the text.  For one of the themes of ‘The Waste Land’ lies in the post first world war disconnect not just with the self, but also from other people.  It is a loneliness that becomes symptomatic of the 20th century.  Its origins the exhibition reveals lie in not just the horrors of the great war but the effects of industrialisation on the human psyche.

At the same time Eliot saw art and culture as the last bastion of humanity, to this end he wove into the poem not just a cast of disparate voices but references from many other seminal texts from classical literature to Dickens.  It is an extraordinary piece that is bewildering, challenging and daunting even to literary scholars.  Therefore, it is to its credit that this exhibition goes some way to finding entry points into the meanings behind the work.

The accessibility of this exhibition is down to the unique nature of the curatorial process which cannot be underestimated.  It was conceived by a research group who began meeting some three years ago.  They came from all age groups and back grounds.  Their role was to initially immerse themselves in the poem, some for the first time.  Regular meetings took them from academic study to thinking as curators, deciding upon the best works that would amplify and compliment the poem.  Group members tended to respond to the work in different ways and took ownership of sections or lines that spoke most to them and their own points of reference.  It is to their credit that they were emboldened to think big in terms of which art pieces would match their part of the poem.  Thus, we have fabulous Leonora Carrington’s headdresses from a 1960s production of ‘The Tempest’, a play that has a key reference in the poem.  But also, Paul Nash’s first world war painting ‘Wire’ that serves to reinforce the bleakness of war, a landscape that arguably became the first ‘waste land’ of the 20th century.

The poem’s cultural influences are again see in Turner’s ‘The Golden Bough’ which suggests that one of the research team had taken an interest in the anthropological work of the same name, a gigantic many volumed study of primitive cultures that also influenced ‘The Waste Land ‘.  The inclusion of the painting works as a playful in joke and has a more assured place in the exhibition than the multi volume study would have.

Perhaps the biggest coup in art terms is the inclusion of the Hopper, ‘Night Windows’, an example of painting that superbly matches, even illustrates the section of the poem dealing with a lonely typist in a bed sitting room who casually loses her virginity to a ‘carbuncular youth’.  Both pieces of art reinforce the loneliness of modern life especially in an urban environment,

It is well worth seeking out and discussing the curatorial process with members of the research group who will generally be on hand during viewing times.  In a sense they are an integral part of the exhibition.  They have gained over the past 3 years tremendous personal insight into ‘The Waste Land’ and indeed the curatorial process itself.  In fact, how often does one get the chance to discuss this process with the curator? They explain the journey from understanding the poem to championing the art work they wanted included, to seeing the exhibition laid out in scale model.  These are aspects of an exhibition we rarely consider when enjoying the result.  What struck me was their passion not just for the poem but the complimentary art works.  They shared the excitement of receive a letter from MOMA granting permission to include the Hopper to the playfulness of selecting and erecting the dead sapling that represents the opening line of the poem ‘April is the cruellest month’.  I must confess to a degree of envy not just in living with the poem for 3 years but in a sense playing fantasy curating as they boldly bid for works by Sickert, Epstein, Wydham Lewis.

What has evolved is a superb and effecting exhibition that does justice to both the poem and the companion art works themselves.  All media are included from Bernard Meadow’s statuettes, to audios of Eliot reading his poem out loud.

The curators took as their starting point this inability to make connections.  The idea of the fragmented society we have inherited from the 20th century.  A world in which we strive to connect with each other both in social terms but also in a cultural sense.  The exhibition does well to show the visitor that ‘The Waste Land’ is both historical but also current.  In this way the concept of multiple curators working together reinforces the poem’s central message, that society is strongest when it coheres and works together.  Whilst the pieces by Moore et al reinforce the bleakness of the poem’s historical context there are included many contemporary works, even one newly commissioned piece that makes the exhibition and indeed the poem seem current.

Amongst the most striking of these are tryptics by the photographer Lalage Snow of soldiers who have fought in recent campaigns, one male, one female.  The triptych photographs reveal the impact of war from their changing facial expressions.  The photos are accompanied by direct speech about their experiences in the forces from naïve recruit to war veteran.  This focus on war and its aftermath is reinforced by an extremely touching but also thought- provoking piece of work by Rozanne Hawksley, ‘Pale Armistice’ that is comprised a wreath made of early 20th century ladies white kid gloves.

The art works then both compliment but offer a way into the poem.  The exhibition is contemplative but also entertaining, for example there is the video inclusion of tarot cards being placed that references one of the works characters, the dubious psychic Madame Sosostris who in Eliot’s mind replaces authentic religion.  Relevant quotes are placed near displays so constantly remind us of the poems themes.  The inclusion of the poet reading the poem is important because it reminds us of the dramatic quality of the work.

Visitors can enjoy the exhibition without knowing anything of the poem but by these judicious use of quotes, Eliot’s own reading and the process of making connections between word and art, a sense of The Waste Land’s meaning begins to form.  In effect the curators’ own hard work has rendered it more accessible.  The layout of the exhibition is logical, introducing us to the insemination of the poem, its relevance to Margate through old photographs and contemporary issues of local newspapers.  We are then guided through the poem’s cultural influences such as war and industrialisation, then there are works that nod to the poet’s unique way of using inter-textuality.

The result is an exhibition that stands alone as a commentary on contemporary life.  It will of course be invaluable to literary students, but I feel too, in its accessibility and insight it will entice readers to go back to the text.  Moreover, I think the exhibition and its enthusiastic curators, will attract a new readership to ‘The Waste Land’ who will feel a little less daunted by its seeming impregnability.  What other single poem would lend it self so well to an art exhibition full of depth but also playfulness?