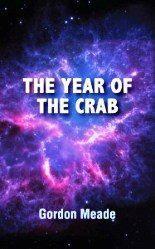 Peter Ualrig Kennedy is full of admiration for the spare elegance of Gordon Meade’s poetic discourse on being faced with cancer.

A diagnosis of cancer must inevit-ably concentrate the mind … those of us who are in sound health may find it difficult to envision the depths of despair engendered by such a diagnosis, or to think about the pains and indignities of surgery and radiotherapy, or fully to appreciate the burgeoning of hope as the faint rays of recovery appear on the horizon.

Gordon Meade has been in my line of sight for several years now, and it is a particular pleasure for me to be writing this review, despite the melancholy subject. In this poignant collection, in which each poem takes the author and his readers through the various stages of his Year of the Crab, Meade employs an economic and spare poetic style to profound effect. A philosophy shines through these poems – unsurprisingly, given the backdrop of cancer, the mood flickers between darkness and light, encompassing a classic trajectory from despair through anger, resignation, and at last to hope.

The title, The Year of the Crab, is the first felicity of this remarkable collection. The short opening poem ‘Truth or Dare’ explores the dichotomy between blinding truths and bad lies – there are bad truths too (“you have cancer” must be a bad truth):

On the second page is a delineation of the apostle St Bartholomew as spoken by Jesus: “Here is a man in whom there is no deception.” This brief statement will underpin the ensuing poetry. Meade bares his soul and his feelings to us. He savours, in ‘A Fresh Apricot’, what may well be his first ever fresh apricot – and in any case:

The poetic style here, and throughout, is conversational. Meade employs an economy of language while he converses with himself and with his listeners. We are an audience with whom he shares his inmost thoughts as he contemplates an uncertain future. In these conversations he looks at the natural world and takes what he sees as metaphors for his perilous condition. His poem ‘The Family Name’ asks for “the word for a number of woodpeckers.”

The troubled mind sees signs and portents in everyday occurrences. A wind is ‘An Invisible Sea’:

and the wind snaps one of the fir trees in the park:

His illness has come on him like an overwhelming sea. The early poems brim with fear: “Why fall asleep when you will never know / whether or not you will ever wake again? / … I have decided not to sleep at all. I wonder / for just how long I will be able to keep it up.” In ‘Medusa’ the poet experiences the sheer fright of being told; he finds himself welded to the frame of the chair …

Although he is turned to stone, the spare eloquence of his language opens our eyes to his distress. He discovers, in ‘Mac the Knife – On Blood’ that a professional familiarity with cancer can blunt
sensitivity; a young consultant:

And yet, following on from Mac the Knife, Gordon can harness a mordant humour to his message – in ‘Ribbed (hormonally)’ he has been on hormone therapy:

As we read through the collection we realise that each poem is a step in the cancer journey from diagnosis to remission. ‘Oedipus – On Waiting’ tells us that all he wants

We must all be familiar with the agony of waiting for news, and that brief stanza says it all. Communication is the key, and it is here that the frankness of Gordon Meade’s poems succeeds so well. “Being a writer, you would think / I would be OK with this; being obsessed / with the inner workings of myself.”

He moves from London to Fife, and to family; there is hope that this marks a turning point. He is back where he belongs “… in a room with a view / of the sea and the sky, with both of you.” In ‘Semi-Permanent’ – he is happy

He becomes more tranquil; he sees Nature more clearly. The sea in February “looks crisp, like liquid / ice, slowly rolling in, unfurling itself, / and then breaking. I have / never seen greyness look / so bright. The slopes of the waves / have the same sheen on them as / the backs of dolphins …” but all of a sudden, and dramatically, he is plunged back into the maelstrom of hospitalisation and radiotherapy. He makes it home again, though, with ‘Radiation Overload’:

Things are getting better by the end of the story – but have I perhaps told you too much of these bracing poems? My hope is that I may have stimulated you to get hold of this collection and to read them all for yourself. My final revelation at the time of writing this review is that Gordon Meade is, praise be, in remission, in Fife, and in good form.