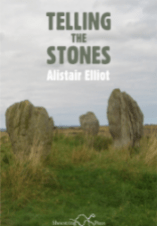 I swear that early in my career as an English teacher (as far back as the late ‘seventies), I used poems by Alistair Elliot in the classroom, so, when searching through those school poetry anthologies I’ve held on to, and finding nothing of his in any of them, I was left mystified. Memory playing tricks again, perhaps, but it led me back to Elliot and I’m pleased it did. I had on my shelves his Turning the Stones (Carcanet, 1993), bought his 1989 My Country: Collected Poems (also Carcanet) and then read his other collections. It’s been an interesting time. He is a poet of substance. Telling the Stones is his ninth full collection and his third with Shoestring Press.

The opening poems of Telling the Stones are a cross-section of what will be found elsewhere in Elliot’s work: ‘Toast’ (addressed to his readers and offering them ‘the untouched fizz / Of verse’) is a translation of a Mallarmé poem; ‘A Scientist’s Idea of Beauty’ is a list poem (‘The joys go on, as the Cockney said, for ever’) that not only earns its last line’s link (‘Pieces of understanding, whiffs of peace’), but also demonstrates that beauty is not the preserve of art; ‘Miss Italia (2013)’ recalls that the winner (and each of her rivals) had ‘a line of Dante’ tattooed ‘on her chest’; ‘The Memorable Life’ is that of Gertrude Bell (not to be confused with the Bloomsbury crowd) who in an unpublished letter told the rueful tale the poem responds to; while ‘My Uncle Matthew’ who returned from Gallipoli to the Highlands where there was ‘nothing to shoot but bottles on the shore / and deer’ and ‘The Lochmore Fragment’ (after Ossian) are encounters with the poet’s Scottish forebears. Thus we find the continuities of European art and culture, the anecdotal serendipity of travel, and a trailing back through family history. And these poems arrive in a variety of forms with rhymes of all kinds. Perhaps it’s appropriate that the loosest of these formally is the Ossian-linked poem because it’s a ‘fragment’. Elliot is a Classicist and knows his craft, but all this means for his own work is that his poems are always well-made. He is a modern poet.

‘In Christine’s Sitting Room’ unites some of the afore-mentioned interests in finding the poet reading Greek in the Highlands of Scotland, worrying about his own memory and supposing that what’s new ‘will disappear / like the old stuff’. He is consoled (up to a point) by the fact that ‘life continues on the page’, where heroes and ‘immortal horses’ serve, among other things, to confirm ‘the pity of this strange thing, death’. I could have said ‘inter alia’ (I’ll return to this). ‘Seals (Iona)’ investigates the sounds the creatures make (‘There are no consonants / in the mouths of seals’) and the poet ends by imagining their listening to us, to ‘the birth of music, baffled, / moved, by the meaningless familiar vowels’. (I like the way ‘moved’ surprises us at the beginning of a line, after the previous line’s closing comma.) This poem strikes me as being properly respectful towards both seals and humans, and it playfully segues into ‘Love-Making in Water’, which moves from seals making love to humans doing the same – in Greek waters, of course, so ‘the upright aleph’ meets ‘the round omega’ (in both species). As for the humans, ‘The sex-police suspect but can’t be sure.’ Perhaps this is male humour, but I’m not sure I care. It makes me smile. As does the post-coital Elizabeth Barrett Browning who follows on with responses to her own sexual discoveries. Peter Porter, a great admirer of Elliot’s verse, said of him ‘His sexy moments, and their opposites, please me.’

Among such opposites are four varied and moving poems about Alzheimer’s. The first of these, ‘This Spring’, introduces us to a woman who keeps muttering ‘Snow’, and ends on ‘pages white / as no’. The fourth is worth quoting in its entirety:

The reverberations from ‘beloved’, the empathic anthropomorphism, the anaphora all contribute to a poem that lovingly catches a mood of near-despair.

Four poems about art and its making (‘Wingless Words’, which has its artistic feet on the ground, begins: ‘Let us praise poets who are not afraid / of Therefore’) make way for seven on Greek themes. In ‘Embedded in the Amber Prose’, an ancient poem (or fragments from it) is subjected to scholarly scrutiny for its formal properties (with the help of Hephaestion’s Handbook on Metres), while ‘Finishing the New Greek Lexicon’ (the epitaph reads ‘hapax legomenon: a word or phrase that is only used once) offers up a cod etymology of how words come to be formed. Such poems may seem forbidding (even a few readings may leave us as bewildered as ever) until we catch on to the fact of both poems being a tease in which the medicinal precision of the prosodic describes an altogether-other kind of language, whether that of poetry or the everyday, that is infinitely more inviting and engaging. In ‘Embedded …’, talk of ‘asynarteton’ and the like is applied to the fragments of a poem, the last of which reads, simply, ‘My lips, your smile…’ and the poem concludes with the parenthetical ‘[Opposite verse 4 the letter k marks verse 1000 of the book]’. Believe me, this is serious good fun. We need not be cowed by learning. Especially if it has the propensity to help us understand.

And so the collection ranges widely on. There’s an excellent poem welcoming a ‘new-born’ to the ‘living air’; another in praise of a well-known cruciverbalist; a couple on breakfast and others on the old Sunday Pic and further travels to the USA, Venice and Ireland; and ‘Deposition’ that I would take as a valedictory note were I not aware of another collection waiting in the wings.

Anyone wanting a cracking good read should seek out Elliot’s ‘On the Appian Way’, originally published by Secker & Warburg in 1984 (it’s also in the Carcanet Collected), an 1800(+) line account of Elliot’s following in the footsteps of Horace’s 37BC journey from Rome to Brindisi. An object lesson in how to tell a tale in verse. In the meantime, treat yourself to a copy of Telling the Stones.