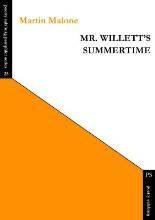 On the back of Martin Malone’s pamphlet, Niall Campbell comments that it is ‘a timely, haunting look at war and remembrance… both finely crafted and with something to say.’ Dan O’Brien notes further that it is ‘At once sardonic and elegiac.’ As a reviewer familiar with Malone’s work (see my review of Cur in London Grip November 2015), what always astonishes and impresses me is his deftness and knowledge of the lesser-known nooks and crannies, a versatility that slips between genres and subjects.

Malone invites, or perhaps more appropriately, lures the reader into this pamphlet via a Séance: ‘Date yourself 2014 (the year of the pamphlet’s inception) and come; / by now it is only language and low opportunity …’ The reader is challenged to doubt the veracity of the received wisdom of the subject: WWI. The scene is set to reconstruct history, to provide evidence by summoning, one-by-one, ghosts of the participants in the past.

If there is rain as in this lovely repeated line, there is mud, and we can smell it already, the odour of it, laced with a hint of revelation. But how reliable is the Ouija board? We are already hooked as the poet leads us forward with the tantalizing title poem, its opening line: ‘How to begin with time…’ an echo of Siegfried Sassoon (Memoirs of a Fox-Hunting Man, 1928), with its quality of idyll before disintegration:

‘Time’ here is the notion of British Summertime, first introduced by William Willets in his largely-ignored pamphlet, ‘A Waste of Daylight’ which noted that, during summer, people were still sleeping when the sun had risen. After Willetts’ death from influenza in 1915, BST was brought in to increase productivity to support the war effort; but the ways that time seems to trap, to shrink, to run out dramatically, appearing full of promise, and ending in tragedy, are concurrent themes in this collection. While the blinds are closed at Willetts’ home when he rides out, ‘Now we have time to die / over and over before our letters reach home.’

So the Ouija board tilts beneath our hands and ghosts of the war appear in all their different guises. The spectral figure of a young Austrian is spotted contemporaneously (2014) on his way ‘up the line’ to ‘Simmering’, one of Vienna’s main cemeteries, a liminal figure suspended between past and present (“Let us Sleep Now”). “Mrs Mounter”, the subject of a painting by Howard Gilman of his landlady, is evoked: her red scarf secured under her chin, her asymmetrical eyes staring toward the inhabitants of her spare room, her years lived impasto, while ‘Outside the world turns to mud…’ and the names she will hear are ‘Passchendale, Sommes, Ypres, Mons…’

In “Machine-Gun Honeymoon”, the ghost of war artist, Christopher Nevinson appears, bracketed by his work with badly wounded French Troops and his marriage to the glamorous Kathleen Mary Knowlman:

Ironically, Nevinson, was excluded from the Vorticists, whose jagged style of lines and angles made soldiers almost indistinguishable from their weapons, but survived the war and went on to an undistinguished career, dying in 1946.

In “Phoebus Apollo”, Malone co-opts a Grecian reference to offer a portrait of the poet, Julian Grenfell, rife with entitlement, in love with war and glory:

The issue of class appears again in “Trench Requisites”, where old soldiers tell privileged young recruits how it really is:

In “The First Women’s Battalion of Death”, Malone takes 24 lines to flesh out the history of Kerensky’s women soldiers, ‘recruited’ in a last-ditch effort to inspire the mass of war-weary soldiers to continue fighting in WWI, the bitter irony at the end of it all: ‘Of course, you know / what will happen when the lads take a drink.’

The resounding finish to this set is the icing on an already multi-tiered and multi-faceted literary cake. In “Dear Revisionist”, the poet makes a plea for ‘truth’ in reflection, with reference to whose truth, and who delivers it:

What Malone’s poems achieve here is a synthesis of the work of poets and artists of the period itself and a disturbing conclusion about the way in which history/historians delude themselves about the past. Executed in an intelligent and persuasive narrative voice, they are intense, thoughtful and brilliantly achieved, a cut above anything else I have seen written on the subject recently.