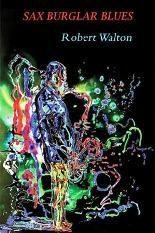 You have to love the Anglo-Welsh parallel world of Waltonia, with its insect-man carrying a double bass through crowded streets, its mournful victim of saxophone theft, its myths made into family and its family myths, an armed man insisting he pay more for a book – and Geoff, who dreams of owning a Maserati. All of these people are brought to life in persuasive detail, but Walton can also take risks with conceits – one, a meditation on ‘Greenland’, begins with five unusual couplets on a view from the air and ends:

A comic outcome of such trickery can be found in ‘A Bus Named Dusty’ – complete with remembered mannerisms and songs which conspire to make it more than, but finally only, a bus. There follow a number of poems that recall the young musician, Walton, dreaming of a cruelly thwarted career. In ‘Sax Burglar Blues’ the speaker unashamedly romanticises his stolen sax:

In ‘Three Out of Four Original Members’ the one who gave up the business, or was left behind, recalls with bitterness and great good humour the life lost:

Many of the poems tread the fine line between sentiment and cynicism without falling off – and the results are often funny – such as when four very different points of view are taken of, and by, a canary named Joey. His speech in the final poem, ‘Joey for President’, is a million miles from a roosting hawk yet strangely prescient:

There’s a swashbuckling tribute to the Welsh poet, John Tripp, and an entirely different memorial to Seamus Heaney which presents an imagined encounter between the poet and a boy trying to write answers about him in an exam, observed by an uncomfortable schoolmaster:

In what is clearly an affectionate address to Heaney, the final effect is typical of many of Walton’s poems in which the reader is left slightly wrong-footed, suspended almost, between the bizarre and the genuine. Something similar occurs in ‘Knocking Up a Garden Planter’ which offers a detailed account of the lengths to which a non-carpenter will go in order to ensure his flawed masterpiece will stand up when filled with earth. If the woodwork is bodged, the comedy is not, and that is the real strength of the poem, though for me it’s almost spoiled by a dreamlike happy ending.

The genesis of all this is presumably to be found in a couple of terrific classroom poems featuring Mrs.Jones, who might have given the young Walton his early love of verse – one in particular where the class performs a piece about Twm the highwayman and which ends with the lines:

There is a handful of poems to Grandparents – tributes full of understated family warmth – and a sad recollection of his Dad’s passion for Cardiff City which the young Bob never quite shared or even understood. Some of the same devotion is diverted towards natural scenes and causes, and
‘Observation Post’ reports on an otter-watch scheme with rapt attention:

The book spans most of a life, since Walton’s first poems appeared in the 1970s and this is his second collection, suggesting that Seren have bagged a cut-price ‘Selected’. Written by the early, middle and later Walton selves, it is lively and invigorating stuff.