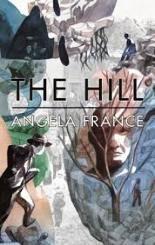 It’s not unusual for a poet to produce a collection that explores landscape but Angela France’s The Hill is notable for the specificity of its focus, its forensic examination of Leckhampton Hill near Cheltenham. This particular hill, with its now disused limestone quarries, was the site of disputes about rights of way in the early twentieth century. It is a landscape rich in flora and fauna, criss-crossed by intriguing pathways. Through a narrative sequence of forms and voices France burrows through time revealing the hill’s social and the natural histories.

This is a personal as well as a local mapping. There is a strong sense of the poet’s deep knowledge of place; a bodily knowledge, muscle memory. She walks us up the hill with all senses alert.

‘Landslip’ – a fragmented lyric – takes us there as the narrator wakes, “my long bones feeling stone in their marrow.” Are these the words of a past inhabitant, or the poet in the present? Time slips and slides, “a dog barks runs by me / disappears a chain released,” and so the reader is released into this time-travelling book that meanders back and forth through past and present.

It is also a homage to protest from the ground up. Scattered throughout are short, squat pieces of justified text – a form suggestive of press cuttings – that allow glimpses of the hill’s social history. In 1894 Henry Dale, quarry owner, bought up areas of the hill and closed footpaths that had been public rights of way. This meant that land used for local recreation, fairs and festivities was now out of reach. Dale even built a cottage across one path ensuring the route was barred.

As well as these news reports, France includes local voices and testimonies. ‘Tails and Ways II’ recounts a conversation in the present with an old woman who recalls that her grandfather was among the local men who tore down the cottage to restore the right of way, how they organised, “to lead hundreds of feet over disputed ground.” Appropriately it is an act of mass walking that reclaims the path.

The natural history of the place sometimes comes through the consciousness of the animals who inhabit the hill as France gives them voice. ‘Hauke Sees’ acknowledges the poet’s debt both to Ted Hughes and Gerard Manley Hopkins with its opening line, “allworld from the wind-eye,” but her old spelling of the bird’s name suggests this hawk sees from a time before poets wrote of birds. Other sentient creatures that bear witness include an adder in ‘Nadder Speaks’ – again the old name is used. In a snaking lineation we get a ground up view, “stonestuff listens /o n woodside and hillside / in delverns and pits … Nadder speaks to wort-cropper / and wold-mouse…” In ‘Brock’ – old name for badger – we go burrowing, “claw sharpstrike into roots/and earth / find allworld below …”

France’s achievement is to show us hill as palimpsest, to show how the act of walking becomes an act of remembering. In ‘Map Reading,’ the narrator retraces the old routes up the hill, revealing how the ground holds layers of time. Attempting to walk through overgrown trails in the present, trying to match ground to map, she observes that, a hundred years ago, the “hobnailed” who walked this hill “named the paths but saw no need to plot/on paper…”

If I have one quibble with the book it’s this: the history of protest on the hill is a complex one that goes on for a decade or more. It’s difficult to glean all of this from the poems. However, the emotional impact of Dale’s actions is felt through the sequence and the sense of place is palpable. This had me curious to know more. You will need to Google to find the full history of the events, but there are several websites and it is a fascinating subject.

That said, the other achievement of this book is more timely and pressing. It might be summed up in a line from ‘Footfall’ – “The ground demands attention.” This is a line keynote to the whole project. It’s a reminder to slow down; to walk in the landscape is to connect to many stories. These lines, addressed to a snail, are pertinent, “…here you are, slowing my feet on the path … reminding me to watch where I tread.” France’s writing through different voices and timescales invites us to turn attention to minding where we tread. What might we find if we burrow down into our own patch of ground?

.
Pamela Johnson is novelist & poet. Her third novel, Taking In Water, (Blue Door Press, 2016, https://bluedoorpress.co.uk/) was supported by an Arts Council Writers’ Award.
Her poems appear in anthologies and were exhibited in Tidelines at Poetry In Aldeburgh, 2017.
She teaches fiction on the MA in Creative & Life Writing, Goldsmiths.