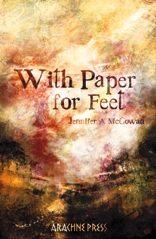 Having been diagnosed with Ehlers-Danlos Syndrome at the age of sixteen, Jennifer A. McGowan went on to become a mime artist, university teacher, calligrapher and recorded singer/songwriter as well as poet. In 2014 Arachne Press noticed and anthologised her work in The Other Side of Sleep [https://arachnepress.com/books/poetry/978909208186-the-other-side-of-sleep/] and has published her collection With Paper for Feet this year.

McGowan’s varied talents play throughout this collection – her love of story, music and rhythm, visual precision and a slant way of hiding pain so that it roars to the front of our attention. The first poem ‘White Woman Walks Across China with Paper for Feet’, first published in The Rialto, is an autobiographical piece about searching for her mother’s ‘birthscape’:

From this the poet derives the title image, noting that ‘Paper was the only thing to get heavier, not lighter, with use.’

The rest of the collection consists of stories told mainly by women in dramatic monologues. Five sections range from folk tales and past lives through The Iliad, Shakespeare’s women characters and real individuals from Tudor times to voices derived from the Bible. As the cover text tells us, McGowan ‘explores, mostly from a female perspective, the guts it takes to live or – often – die, unheroically’. The dreadfully ordinary turns in her care into something noticed, and shone:

These are tales about:

‘Something About Love’ is told by one of Snow White’s devoted dwarves: ‘She had the sweetest breath, / so we didn’t know about the apple / till the prince persuaded us / he knew more about love, / and we let her go.’ Its tenderness culminates in the final stanza:

The collection’s second section leads off with an ‘Iliad’ pastiche (‘after E. F. Taylor’) beginning, ‘I sing in the arms of a man.’ Here is a powerful, youthful strength though it is a pity to see ‘rosy-fingered dawn’ there, a translation’s cliché. The poem finishes beautifully though:

Helen of Troy gives us her side of things in a slangy voice that rankled to begin with but makes this one of the more memorable poems:

An unusual perspective makes ‘Lady Macbeth in Palliative Care’ hover long after the book has closed. This time we are in the company of a geriatric nurse:

In ‘After the Battle’ in the fourth section, we are with a man who gathers the post-battle corpses for burial, hearing how he justifies his work to himself while he helps himself to rings from dead fingers for his wife: ‘Not them big flashy ones – / those are missed, and anyways / the sort as wear them / usually get claimed. It’s the poor sods / left behind I deal with, them /as believed fancy words / and died for ‘em.’

This is well-imagined storytelling, intriguing and well-paced, always with a distinctively generous poetic voice. A challenging and rewarding read.