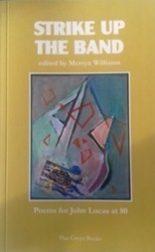 Richie McCaffery enjoys a poetry festschrift put together for the 80th birthday of poet, critic and publisher John Lucas

I hope I’m not doing the contributors to this bumper anthology of poems for John Lucas on the occasion of his 80th birthday a disservice by beginning my review with a focus on the recipient / subject of this book. He needs to be mentioned first and no doubt he will be well-known to all who read this as the founder and editor of Shoestring Press. But he is also a writer, poet, academic, and, for my money, one of the most authoritative poetry critics alive. He has no time for prevailing trends or tastes and seems to be one of the few who can judge a poem independently without recourse to the poet’s backstory, biography and hype. He takes risks as a publisher that need to be taken. For instance, he is one of the few UK publishers willing to bring out translations of Dutch and Flemish poets, as Donald Gardner’s translations of the poems of Remco Campert show.

In the ‘Acknowledgements’ we are told that this book was assembled entirely via email because it was a way of ensuring the project’s secrecy, as Lucas himself shuns the internet. I’m something of a Luddite myself and really value pen and paper correspondence and I keep a folder full of letters I’ve been sent. One of the most treasured of these is a handwritten letter from John Lucas thanking me for a review I’d written of a Shoestring book and also expressing his admiration for my first collection Cairn. That is all the validation I need as both a poet and a reviewer and when I’m feeling down that letter is sure to pick me up again. If you’ll excuse this rather self-indulgent digression, what I’m trying to say is it does not surprise me, then, that so many poets would be keen to pay tribute to Lucas in this way, with an offering of poems. The book is steeped in the goodwill that Lucas himself both preaches and practices.

The anthology is limited to existing poets from the Shoestring stable, but I think the parameters could have been extended more widely very easily. That said, there are a wealth of outstanding poets here already and at the risk of invidiously naming names: Ruth Bidgood, M. R. Peacocke, Helena Nelson, Matthew Sweeney, Toon Tellegen et al. Reading the poems in one sitting is enough to show that there are two types of poem written in these situations – the occasional poem written directly to order and explicitly about the subject and poems not on theme but submitted out of respect and as a gift by the poet. That is to say, poems that only belong in the context of the book itself and others that could have a life outside of its pages. However, Helena Nelson’s poem ‘Pickle’ seems to me to strike an admirable middle-ground – it is a poem that stands up on its own but also speaks to Lucas as an editor and arbiter of poetry. Nelson is saying that perhaps we should not spend so much time prospecting on which poet will turn out good in the end and which one will fade out:

For me, the most memorable poems here are the ones that try to say something about the craft of poetry, like Nelson’s above, or M. R. Peacocke’s ‘Sleights of Craft’ where we are told that poems are interested in aesthetic truth, but they might reach that truth via some rather underhand and cunning practices:

There are too many poems to mention and the reader is best picking up a copy of the book to see for themselves. I found that after reading Strike up the Band that I was left with a sense of the polyphony and solidarity of this band – all the singers and musicians playing together and in harmony for the sake of a great cause. Merryn Williams, the editor of this anthology, also contributes a poem ‘The Menshevik’ which is a poem that really stood out for me. It seems to be saying something powerful about writing, and by extension, poetry. It is about an old lodger who had written some obscure political pamphlet Down with the Death Penalty many years ago but is now living in obscurity and borderline poverty. The poem ends with this startling image and concept:

This stanza reminds me strongly of a poem by Tomas Tranströmer that I can only distantly remember and I’ve forgotten the title. In it the speaker goes down into the crypt of an old church and sees dirty plaques on the walls commemorating the various dead organists who had served the church. The speaker comes to the realisation that they brought music to their lives and left the world a better place, but they are lucky because they are forgotten by history, their impact is anonymous. Perhaps I’m just groping towards trying to say that John Lucas and his Shoestring poets who have contributed to this book remind us that we need to put our egos to the side and simply serve the poem, as that is what truly matters. I hope I’m not too late in joining these poets to wish John Lucas a very happy 80th birthday indeed.