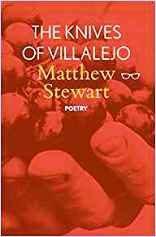 The Knives of Villalejo straddles two countries and two cultures, offering snapshots of life from childhood to adulthood yet contain a hint at resistance to change. In the title poem, the man whose job it is to sharpen knives moves through the village,

His job enables domestic life to continue, but, there is a fear of a favourite knife breaking despite the care taken with it, which can also be a metaphor for fear of losing a loved one despite nurture. The loss needn’t be due to death; it can also be a child growing into independence and leaving home which changes the family dynamic. This resistance to change is echoed in a couple of poems whose titles are unforgotten phone numbers, e.g. ‘You’ve reached 020…’, the beginning of an answerphone’s request to leave a message,

Change isn’t always negative. In ‘From Farnham to Villalejo’ the poet smiles along with his mother-in-law at a joke and concludes “For a moment I almost belong.” Many poems contain the sense of being an observer on the edges of the main drama yet able to perceptively record the event. Two sequences are about food and wine, almost universal in their sense of nurture, but alongside a note of anxiety that things won’t turn out as planned. The first part of ‘Artes Culinarias’ recreates a mother’s recipe,

Readers are spared voluminous reminiscences and invited to call up their own childhood food memories. The awkward consonants and clunky rhythms of the first stanza give way to the longer vowels and smoother rhythms of the second, suggestive of fond memories and nostalgia. The short poem excludes indulgence. The opening poem in the ‘In the Wine Trade’ sequence, ‘Back Label’ sends up those pretentious purple-prose descriptions of wine,

At some point, we’ve all found ourselves struggling to find a new way of describing a familiar experience and discovered that somehow a cliché just fits, even though it’s just a cliché. However, the universal experiences explored in The Knives of Villalejo avoid the clichés and remind readers that you don’t have to travel to explore the richness of experiences – both positive and negative – within life. The sense of not belonging sharpens the depth of experience because the desire to adopt another’s customs so as not to do or say the wrong thing turns out to encourage more acute observation. At face value, these are gentle poems that wear their craft lightly; but a second look reveals their identifiable truths. Like a good wine, Matthew Stewart’s poems have a long finish.