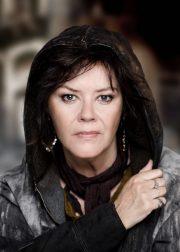 Mother Courage and Her Children

This is a brave production by Hannah Chissick as Brecht’s epic drama is meant for the large scale and, squeezing such a huge concept in to the Southwark Playhouse, takes guts.  The text was written during the Third Reich and, although it is set in Europe’s seventeenth century religious wars, its prophetic vision of Hitler’s Germany and the industrialists who made money out of it, cannot be ignored.

Brecht has produced one of the twentieth century’s most radical anti-war plays.  It concentrates on the role of the collaborator, Mother Courage, who lives on the spoils of war.  Brecht’s dramatic device is to have her drag her wagon full of produce around the stage to remind us of the inevitability of the cycle of war which men make against men.  Courage’s life depends on a never-ending cycle of death.  She is a battlefield parasite and Brecht did not intend his audiences to empathise with  Courage.  She hates peace and loves war’s profits.  Even when her own children are stolen by the army, she persists in tethering her wagon to the mass murderers.

Brecht meant his audience to look at this character with a sense of distance.  His theory of acting is that of the Verfremdungseffekt, usually translated into English as ‘Alienation’.  A better translation would be ‘to make strange’.  Brecht challenges the war profiteers and makes the point that even collaboration on the smallest scale is to passively partake in the business of murder.  Brecht is not interested in simple binary presentations of character.  He wants us to view his protagonist through the lens of political analysis.  His point is that, in an unjust and brutal society, morality is the preserve of she with a full belly.

Brechtian theatre is often rooted in vaudeville, cabaret and sometimes the grotesque.  We know this from The Theepenny Opera, The Rise and Fall of Arturo Ui and The Caucasian Chalk Circle.  Unfortunately, in this casting, Josie Lawrence as Mother Courage, never enters into this theatrical style.  She is played for warmth.  it is Laura Checkley, who plays the prostitute- made- good, who brilliantly produces a Brechtian performance which is ironic and clear in its realization.   Also strong was David Shelley’s pastor who, like Chekley, intelligently presented his character as social comment.

Brecht’s theatre often contains a gestus which expresses the heart of his dialectic.  In this case it is the dragging of the laden cart which moves like the hands of a clock.  However staging this drama within the traverse at Southwark Playhouse means that this vital ever-turning image of humans pulling heavy goods is impossible.  No circularity of movement can be realised on this ribbon of a stage.  The effect is to reduce the power of Brecht’s image and the metaphors it suggests and therefore we miss the point of the inevitable circular link between those who murder and those who supply the killers.  It is only in the last moment of the production that the importance of this image hits home as Courage takes the time to drag the cart along the strip of stage.

There are some wonderful moments in this production.  I enjoyed Hannah Chissick’s split stage device where the actors freeze as if they were characters in a  Bosch painting.  Also effective was her use of music, in particular with Rosalind Ford’s solo.

I was glad to see this major work but feel that Chissick’s strong directorial impulses need more resources and a larger stage.  She also needs more actors who are trained in Brechtian political theatre.  Sadly English drama schools mainly focus on Stanislavsky and ignore the importance of Brechtian theatre.  This means that when a Brecht play is produced here, few actors are aware or trained in the theatre language that Brechtian theatre requires.