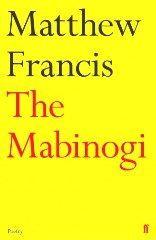 Transforming Things Into Other Things: Paul McLoughlin examines closely what Matthew Francis has done with a Mediaeval Welsh epic

Matthew Francis’s Blizzard (1996) opens with a pantoum-like poem, followed by one that employs a 6-line stanza consisting of five 9-syllable lines and a closing 4-syllabler (that brings to mind and ear Keats’s in ‘La Belle Dame Sans Merci’). The later Mandeville (2008), a fantastical-historical narrative in verse, is told in 9-syllable lines, 900 of them (arranged in 300 unrhymed tercets across the volume’s 40 poems). Here, clearly, is a poet interested in working within constraints, and there are indications in his early work of an affinity with the loose gathering of French-speaking writers who took their lead from Raymond Queneau in the 1960s in practising Oulipian techniques. There is a great deal of fun / intrigue / frustration / despair (delete as felt) to be had looking up / trying out the likes of S+7 (N+7), Snowball, Lipogram or Prisoner’s (Macao) constraint. Queneau’s Exercices de Style recounts the same inconsequential episode in 99 different ways, while Georges Perec’s 300-page novel La disparition exists without the letter ‘e’. There is nothing as extreme as any of this in Francis, though some of Blizzard, such as ‘Poem Without Words’ or ‘Poem Found in a Box of Indoor Fireworks’, appears to come close (the constraints do not always readily reveal themselves). But his interest seems to have become distilled into a concentration on the possibilities offered by syllabics. ‘Ocean’, for example, from Dragons (2001) deploys a form (presumably of Francis’s own devising), a 10-line ‘stanza’ (split 4-3-2-1), in which the syllable-count decreases by one each line. Here is the poem’s second such stanza:

This is one of the precursors for the formal unit of The Mabinogi which is a fourteen-liner (a sonnet of sorts presumably arbitrarily presenting itself as a suitable vehicle) of shortening lines of decreasing syllable-count that keeps turning back on itself and setting out again. But more of that later.

Organization of any kind is artificial, of course, something often forgotten by those who would lecture us on the relationship between form and content. What they might usefully remind themselves of is the less scholarly inevitability that how something is said always matters. This involves all manner of factors, but the relationship between form and content is essentially one of tension, out of which it is to be hoped creativity arises, or in which it flourishes. This tension (in various manifestations of fluidity) is exemplified, say, in music by sonata-form and the 12-bar blues, and in poetry by the sonnet and the villanelle. Some of these relationships are less productive or dynamic than others, of course, but they are all relationships, even in free verse (in which form masquerades as formlessness) and all good composers and poets have ears that attend to these concerns. The point of a group like the Oulipians is that strict constraints are foregrounded until, at best, the constraint so permeates reading as to render itself invisible (and, therefore, apparently irrelevant). It’s like school homework, which can never be any good unless the person completing it, at least for a time, forgets it’s homework. In this sense, syllabics are nothing more than another tension.

In Francis, the reader gets the impression that he worries about where the next poem is coming from (and, yes, who among poets doesn’t) and so looks not to anything as potentially alienating or sentimental as ‘inspiration’ but rather to a set of constraints that can help him at least to get going. It spoils the famous whiteness of the page, and does so in an un-self-conscious and paradoxically unforced fashion. Some of Francis’s constraints are provided by his subjects, too, a demonstration that constraints are not always formal in nature. Content can also have its day. Mandeville gives voice to the man Thomas Browne described as ‘the greatest liar of all time’ (a gift of an unreliable narrator to any writer) and explores, like The Mabinogi, ‘a world of marvels, real and fantastic’, while Muscovy (2013) draws variously on six written sources (including David Bellos’s Georges Perec: A Life in Words) and on photographs and paintings to present a shifting world both magical and real. All of this points to a humility where the forcing necessitated by the marriage of form and content avoids that other pressure of having to have ‘something to say’. Essential though this ‘having something to say’ may eventually be, it is a function of the finished article rather than its impetus. So the humility of a process begun in constraint is rooted in a desire, welcome in an age of ‘me’, not to thrust oneself forward but rather to allow the self to emerge, if that is a necessary part of the process.

The Princeton Encyclopaedia of Poetry and Poetics devotes only half a column to syllabics and in doing so mentions the usual suspects, including Marianne Moore and poor Elizabeth Daryush, who otherwise scarcely gets a mention anywhere now. The entry cannot resist the conclusion that, on its own, syllabics, cannot qualify as verse at all (as if anything else—metre, accent or whatever—can qualify on its own). Francis, like Moore before him, shows syllabic verse to be much more than its deriders would have it reduced to. Here is an example of The Mabinogi’s staple stanzaic form (those referred to are Pwyll, the prince sentenced to a year of ‘being’ Arawn, the king he has slighted, and Arawn’s wife, who is unaware of the switch):

The music of alliteration, assonance, repetition and anaphora is as evident here as the momentum and continuity provided by diminishing and expanding lines with odd-numbers of syllables. The stanza is rich in poetic glue. Indeed, the book as a whole (there are 156 ‘sonnets’ in all, covering The Mabinogi’s four tales or ‘branches’) is a technical tour-de-force. The stanza-form is shown to be fluid and flexible: for example, the alliteration can ease up, or be replaced by repeated words, and just in case there is a danger of anyone considering the poet to be in the thrall of his own constraints, there are times (though I found only ten examples) when the syllable count is ‘wrong’. And this being a work of modern verse (however deployed to bring to mind mediaeval times), there are echoes of modern poems: the third sonnet in the first tale recalls the first of Geoffrey Hill’s Mercian Hymns (which are not so far removed from Wales), while later in the same tale a sonnet about a foal being born is reminiscent of (though obviously less harrowing than) the account of a lamb that could not get born in Ted Hughes’s Moortown. Francis’s unfussy command of language is a beguiling asset. If poets all too often reach for an unnecessary adjective, Francis’s are strikingly apt—‘filched chitterlings’ (p.4); ‘lightning’s snazzy gold’ (p.10); ‘fiddling cornfields’ (p.49); ‘flaky charcoals’ (p.50); ‘chief of Wherever and its wispy people’ (p.70); ‘a sulky sea’ (p.74); ‘the erasing fog’ (p.89)— and there can be little doubt that many of these emerged during the counting of syllables. But other parts of speech fare just as well. There is much that is memorable. In the opening stanzas of the second tale, Bran, the giant British King, is ‘a furlong of a man’ with a ‘scrubland of beard’ and ‘battlement teeth’; we see ‘a flotilla of seagulls’; sailing ships crossing the Irish Sea are ‘a volume of blank pages … approaching from the smudgy west’. This last image reminds the reader that the first tale had opened with another bookish reference: ‘Here at the turn of a leaf a horseman is riding’. And there are plenty of other moments that delight; for example, when modern idiom finds its way in: ‘Night gets its own way in the end’ and ‘The legs won’t have it’ (p.17), and there’s a Salman Rushdie moment when Gwydion recalls riding to court ‘taking only the stories I stood up in’(p.71). Sheenagh Pugh in her helpful and informative Amazon notice (an interesting sign of the times—if you can’t beat them …) describes Francis’s book as ‘literally, a page-turner’. She is right. She is right, too, in insisting that he is one of the very best poets we have (even if she suspects he is not miserable enough to win prizes). And I make no apologies for appearing to have stolen her review title. I didn’t spot this until I’d done it, and anyway it’s from Francis’s introduction, and perfect.

In his introduction to The Mabinogi, Francis considers possible sources of resistance the modern reader may have to overcome. Setting aside our modern sensibilities, ‘We may, for a start, have little sympathy with blood sports’ or with the ‘pastimes’ of a more chivalrous age, and ‘we are invited to suspend our disbelief in magic’. All of this requires the reader to make ‘a considerable imaginative leap’. This is of particular interest because it may, instead, be the case that Francis has made the epic and largely unread Mabinogi(an) tales (first written down in fourteenth-century Mediaeval Welsh after a long oral history) accessible (and in verse to boot) to an audience otherwise enthralled by the Box-Set likes of TV’s Game of Thrones and Merlin and managed it without any of the dumbing down that might disturb academy. Gillian Clark’s joyful response to Francis’s achievement has provided Faber with what other publishers might well have put on the front cover of the book: