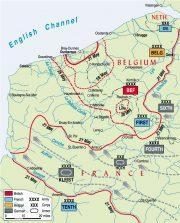 The Creation of the Myth of Dunkirk

The myth of Dunkirk recast the evacuation of the British Expeditionary Force from Northern France as the achievement of the “little ships” (part 1).
Part 2 looks at the “miracle of Dunkirk” and the legacy of the “Dunkirk spirit”.

When Neville Chamberlain declared war on Germany on 3rd September 1939, the country he led was by no means united in its opposition to Hitler.

The English aristocracy numbered many Nazi sympathisers in its ranks, who would have welcomed the introduction of a regime modelled on the Third Reich into their country during the 1930’s.

The government suspected that the wider population concealed an army of fifth columnists, citizens who looked like ordinary people but were, in fact, spies ready to pass strategic information on to the Gestapo in the hope of bringing about a German victory.

The press was highly sceptical of the government’s efforts to get the country on side and, in particular, the work of the much-derided Ministry of Information and its exhortations to “be like Dad, keep Mum”.

If the people were going to tolerate the effective suspension of the constitution and prepare for a state of total war, the government needed to tell a story which would completely transform the national mood.  The evacuation of Dunkirk was that story.

The wireless in the corner of the nation’s sitting rooms became the most effective means of broadcasting the story and the voices of two men who told it: Winston Churchill and J.B. Priestley.

In the run-up to Dunkirk, Churchill had sent this message in his first broadcast to the nation on 19th May 1940, which was heard by half the population on their radios:

… there will come the battle for our islands, for all that Britain is and all that Britain means. In that supreme emergency we shall not hesitate to take every step – even the most drastic – to call forth from our people the last ounce and inch of effort of which they are capable.’

The broadcast was given very positive coverage in the next day’s newspapers and the ball started rolling.

The news that the Belgian army had surrendered on 29th May was considered potentially disastrous for the British Expeditionary Force.  So, when the public learned that a large part of the BEF had already been evacuated on 31st May, it seemed like a miraculous feat.

The myth of a “miracle of Dunkirk” had been set in motion by George VI’s call for a national day of prayer on 26th May, which seemed to result in divine intervention.  Commentators and letter writers had a field day when calm seas and a high mist came to the aid of the evacuation and confounded the efforts of the Luftwaffe.

The development of the narrative was carefully guided. Initially the BBC was free to speak to cheerful Tommy’s as they touched English soil, but on 1st June Military Intelligence forbade any further interviews with soldiers who had seen active combat in the days before the evacuation.

On 2nd June the Ministry of Information banned the acting Director of Military Intelligence for the BEF, Lieutenant General Noel Mason-MacFarlane, from addressing the public. One can only speculate on their reasons for gagging an individual who had played a crucial role in rescuing 338,222 troops from the coast of Northern France

The memory of defeat in Northern France was already beginning to fade.  The soldiers of the BEF were safely home, heads held-high with their spirit unbroken.

J.B. Priestley’s series of BBC broadcasts, Postscripts, added momentum to the idea of the miracle and sowed the seeds of the “Dunkirk spirit” in the minds of his listeners.

Priestley, a successful popular novelist and playwright, was a patriot, socialist and champion of the “little man”.  He believed that those who fought in the First World War had been badly let down by successive governments which failed to deliver the promised “land fit for heroes”.

BBC programming was bland and repetitive during the early stages of the conflict. It was so dull that many listeners tuned into the pro-Nazi propaganda transmitted on shortwave radio by William Joyce, or Lord Haw Haw as he was known, in preference to the national broadcasting service.  Postscripts was commissioned to draw listeners back to the BBC and stir up some enthusiasm for the war effort.

Priestley’s first broadcast was made on 5th June and it changed everything.

Here he is telling the story of the Gracie Fields, a little paddle steamer who sailed to her doom at Dunkirk:

‘ … this little steamer, like all her brave and battered sisters, is immortal. She will go sailing down the years in the epic of Dunkirk. And our great-grandchildren, when they learn how we began this War by snatching glory out of defeat, and then swept on to victory, may also learn how the little holiday steamers made an excursion to hell and came back glorious.’

Like Churchill, Priestley had an extraordinary gift for presenting the English people to themselves as an independent race, fearless and unbeatable, and, in doing so, conjured up the Dunkirk spirit using plain words chosen to go straight to the heart.

Priestley’s Postscripts inspired a new level of commitment to the war effort, but a year later some favourable remarks about Marx and the Communist Manifesto led to his dismissal from the BBC.

The appeal of the Dunkirk spirit has endured and its echoes can be heard in the negotiations over leaving the European Union in the aftermath of the 2016 referendum.

Supporters of the decision to leave seem beguiled by the idea of a little people who have taken on two powerful adversaries, the EU and a national liberal elite: the twin obstacles standing in the way on their road to a better life.  In their scheme of things liberation from European regulation will lead to low prices, high levels of productivity, and great prosperity.

This vision of a glorious economic future relies on some very dubious assumptions about the status of a nation, which has never made a realistic adjustment to the loss of empire, and the desirability of expelling immigrants from its tightened borders.

Priestley’s appeal to the Dunkirk spirit depended on an idealised notion of the national character at a time when people faced months ahead of aerial bombardment and the destruction of their homes and cities.

Leavers, on the other hand, have fallen back on a debased version of the Dunkirk spirit to engage with some nasty tendencies in the population and head for an uncertain future, while the usual barriers to the progress of ordinary people stand firmly in place.

Quotes from the Broadcasts made by Churchill and Priestley were taken from the work of Professor Duncan Anderson posted at:

An interesting perspective on the role of class in the presentation of the Second World War to the English people told from an American point of view is given by: