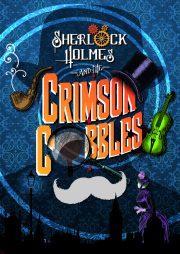 Sherlock Holmes and the Crimson Cobbles

In a post-factual world of discredited journalism and politicians who, more than ever, we do not believe, theatre with its direct emotional truth can provide a much-needed release.

Toby Hulse’s Sherlock Holmes and the Crimson Cobbles acknowledges the debate with an extended opening essay on the layers of nacre embellishing the grain of truth that he presents as the state of the press even in Victorian times.

But his aim is light-hearted as he opts for diversion rather than catharsis and giddies us with literary jokes until we question whether Conan Doyle’s characters are any less real than you or I.

For fans of the Benedict Cumberbatch television Sherlock, this version is the antithesis of slick, cool and edgy, but has a cosy charm in keeping with Chipping Norton’s idyllic theatre.

Its most experimental moment is when Mrs Hudson’s marmalade is transformed into a lethal, slow motion weapon.

For writer Hulse and director Kirstie Davis, a programme note tells us it marks the culmination of a long-harboured wish to develop a version of Holmes and Watson for three actors.

Alasdair Buchan gives us a robust Holmes and Ben Tolley is the practical, normal Watson.  It falls on Neal Craig to run around being everyone else, including a bearded Mrs Hudson and a certain Dr Henry, who at first glimpse is genuinely sinister, which comes across as accidental in a production that goes out of its way to avoid undue menace and ultimately makes murder seem more fictional than real.

Ink, Duke of York’s Theatre, London. Review by Barbara Lewis. The Creation of the Myth of Dunkirk, by Jane McChrystal.