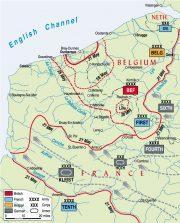 The Mystery of Dunkirk

Sturgeon writes that Dunkirk is:

…a work about World War II that contains no before and no after, in any respect; it considers only the battle itself in the form of pure combat.  But it also has no before or after because it is a period film that lacks all memory …

I believe this assessment picks up a key element in the creation of the myth of Dunkirk, which is shared by the film and the version of it imprinted on the national memory: they both tell the story of a major event in history divorced from its historical context. 1

Over the years, repeated celebrations of the little ships and their rescue of the BEF have made me wonder how the result of the worst military defeat in Europe since Napoleon’s victory at Austerlitz in 1805 has become enshrined in the English mythos as “our finest hour”.

To this day the Dunkirk spirit can be invoked whenever a group of English people face a dangerous situation with a degree of stoicism and unity of purpose which enables them to survive and pull through, frequently against the odds – a spirit epitomised by the story of little ships sailing the Channel under attack from the Wehrmacht and the Luftwaffe.

The original myth of Dunkirk was woven by the state, church and media, shorn of the complex chain of events which led to the evacuation and the role played in its successful execution by the Royal Navy.

The foundations of the Dunkirk story were laid down in 1930’s with preparations the French made for a German invasion.  They built a series of fortifications, known as the Maginot Line, along their eastern border with Germany, in anticipation of an attempted invasion on that front.  During the early months of the Second World War the allied French and British armies concentrated their forces along the Line.

So, when Germany launched its invasion through Belgium, the allied forces were caught completely off guard.  Once the Germans had entered France, they quickly reduced the allies to a state of chaos by breaking through defences at weak points and destroying all their lines of communication.

With the allied forces completely unprepared for this style of attack, known as Blitzkrieg, the Germans were able to press on through Northern France and have them surrounded at Dunkirk by 19th May.

On 16th May, just six days after being elected Prime Minister, Winston Churchill, had presented himself to the French High Command in Paris in order to find out how they intended to fight back against the advancing German army, only to discover there were no plans.

With no plan of his own, Churchill contemplated the risks of leaving the BEF in France, when a German invasion of the whole country seemed inevitable, and began to consider a partial withdrawal of the British force.

The French requested further aerial support from Churchill and he sent ten RAF squadrons, which they saw as a sign of his continued commitment to the allied cause.  However, by the time he arrived back in London he had resolved to withdraw the entire British force and go it alone against Germany.

As the BEF headed towards Dunkirk for evacuation, they were ably protected by the Belgian army, which fought on even though their own country had been overrun.  Churchill had expected the Belgians to absorb the worst of the German assault, but when they asked the British for help, Churchill told the War Cabinet:

…the Belgian Army might be lost altogether, but we should do them no service by sacrificing our own Army…

Two days after the evacuation began, with the Belgian army on the verge of collapse, King Leopold announced its surrender on 28th May.

Churchill did not hesitate to blame the invasion of Northern France and British withdrawal on the Belgian capitulation.  If he was going to mobilise the nation for total war, he needed to divert its attention from the allies’ catastrophic lack of readiness for the German onslaught.

The evacuation of Dunkirk took place over ten days.  No French or Belgian troops were allowed to board a vessel until all British troops in the area had been picked up.

During the last two days eight hundred vessels, requisitioned from Kent and the Thames Estuary, were deployed to carry troops from Dunkirk to Royal Naval ships which were too big to land close to the shore.  Most of the crews were made up of naval reservists, but some civilians volunteered to go along with them.

These brave men and women rescued 38,222 troops in their little ships during the operation, but this figure represents 13% of the 338,222 troops evacuated from Dunkirk.  The rest were picked up by the destroyers, minesweepers and personnel ships of the Royal Navy.

How, then, has the idea that the BEF was rescued by a band of civilian volunteers in their little ships become so deeply rooted in the English psyche?

Part two of this article, The Creation of the Myth of Dunkirk, will look at how the myth was forged, why it has remained so potent and what it means today, as England prepares to cast itself adrift from Europe.

1.Lynne Olsen’s Last Hope Island: Occupied Europe, and the Brotherhood That Helped Turn the Tide of War gives an excellent, highly readable account of  what happened in the days before the evacuation of Dunkirk, in a work which traces the origins of the EU to the coming together of heads of nations exiled in England during the war

An extract can be found here: