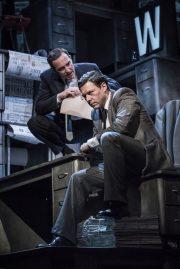 In the shocker “can-it-possibly-be-true?” atmosphere of tabloid journalism, this theatrical account of Murdoch’s acquisition of a moribund Sun newspaper and his appointment of the angry Albert “Larry” Lamb to bring it back to life tells us the notorious press baron’s grandfather was a minister in the Scottish church.

In an act of heresy, he split from the main establishment and set up a rival branch.

His grandson Rupert’s mission was to do the same for the British press and to tear up rules whose rationale is to keep the outsider out and the lower classes in their place.

So far, so sympathetic and we might find ourselves impressed by this portrayal of a man usually thought of as the destroyer of all ethics rather than a brave opponent of smug vested interest.

But because life is more confusing than tabloid portrayals, it’s unclear where the mission ends and runaway consequences that ruin lives take over.

That leaves us with a show that, like The Sun is fun, often hilarious, captures the exhilaration of a crazy, impossible adventure but ends in tears.  For a West End show, it’s a slightly uneasy hybrid of unresolved ethical questions, classic drama based on a potentially noble human being’s rise and fall and a good night out.

As with Murdoch, it does not have full control over its consequences and journalists, staring in horror at the uncertain course ahead, would make for the most rapt audience.

Under Rupert Goold’s direction, the two central characters leave little room for the rest of the cast.

Murdoch, given depth by Bertie Carvel, is stooping, aloof and neither a clear hero nor simply a villain.

His main man – Lamb, the talented son of a blacksmith, too remote from the status quo to be made editor of The Mirror and therefore the perfect choice for the job of making The Sun steal its readers – comes closer to the straightforwardly heroic, but is tragically flawed.

He is played by Richard Coyle as a sure-footed natural leader, energetic, smart, decisive, inspiring a team, taking them with him on his journey at least for the first act, which is a riot of outrageous headlines and humour that empowers the lower classes to laugh at pomposity.

A core scene is brainstorming of what the public really want – not the old school lecturing of The Mirror under the Welsh, avuncular sway of Hugh Cudlipp (Jonathan Coy), but free stuff, gossip and, let’s be honest, sex as Joyce (Sophie Stanton) the feisty women’s editor baldly states.

Her candour forces Tim Steed’s Bernard Shrimsley, the stickler for page layout, from behind his shield of Zola translation into a confession that what he most wants to read about is the weather.

It’s a moment to feel nostalgic for in the second half when adult realities bite and The Sun’s biggest story ends in tragedy.  Even then, as Murdoch cruelly points out, it does not get the circulation figures ahead of The Mirror’s.

The thing that does is the topless page three picture.  If the brainstorming of the first half is Lamb’s triumph, the tongue-tied scene of persuading Stephanie Rahn (Pearl Chanda) to bare all is his nadir and the devil-may-care swagger has gone.  He cannot find his words.  He cannot even light his cigarette, so the page three model has to do so for him and he is entirely awkward in her presence.

Harking back to the first scene that lays out the Who, When, Where, What and Why of journalism, the only Why now is because it sells more papers.  There is no satisfactory moral reason and the much bigger question is: What Next?

That is addressed in the programme, which quotes the august Financial Times and its gloomy finding that social media is the natural sequel to the tabloid onslaught on the old institutions.

And compared with Murdoch’s approach, which was based on the premise that to be a good story, it had to be true, the big, post-factual What Next looks even worse.