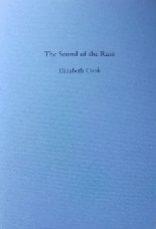 Peter Ualrig Kennedy is excited by Elizabeth Cook’s impressive collection of referential poems, each one new, fresh and alluring.

In reading The Sound of the Rain I was captivated from the start. Who could resist the beautiful opening of the first poem ‘Rain’? Elizabeth Cook harks back to Hart Crane’s poem ‘My Grandmother’s Love Letters’:

There is a real freedom in this short poem, with its sprung rhythm. In the next poem ‘Thinking of Thomas Hardy’ there is a distinct tightening of form, and Cook gives us a disciplined triolet describing the death of a fieldfare. The poem is completed by a quatrain with a lovely word picture of the dead bird, so light that “It rested on his palm like a bauble of thin glass / a breath could blow away.” Cook has produced an elegant evocation of one of Hardy’s earliest recollections of childhood, when on a cold winter’s morning his father idly threw a stone at an ailing fieldfare and killed it outright.

We begin to appreciate, in reading through the collection,that these poems refer back to a literary or historical source. ’The Candles’ is a brief foray of only eight lines but with such a well drawn picture of three candles (now step away from that thought of fork handles) – three candles, of which the tall thin one has diminished first, “gone: not a snout of wick / not a drop of wax left”. We are introduced to Miss Netticoat, “tall and lovely in her white petticoat”, the very embodiment of a wax candle. The longer she stands, the shorter she grows. Miss Netticoat was once upon a time Little Nancy Etticoat, but that need not detain us. (‘Ninny Nanny Netticoat’ has been attributed to Beatrix Potter; here Cook recalls it as a nursery rhyme, and has crafted an elegant short poem from its bones.)

‘The Tears of Marilyn Monroe and Edith Sitwell’ depicts an event in 1954 when these two exceptional women were brought together, by Life magazine, in the Sunset Tower Hotel in Hollywood. Cook cleverly envisages the conversation of the unlikely pairing, and the opening of their hearts to each other:

‘Orrery’ (i.m. Aletta Seymour) is much more formal, its two stanzas manifesting regret and loss in an elegiac imagery – there’s some distortion of the metre which seems at first clumsy, but the reason that it is there is to introduce a bravura element of lost playfulness:

So to the next poem which again looks back to an historical figure. The unnamed Mary Anning is here the referent of ‘The Young Palaeontologist: Lyme Regis, 1808’. Cook has crafted a perfect portrait of the intelligent nine year old who is fascinated by what she finds in the “slippy clay” and the rock pools:

Isn’t that final alliterative line quite splendid? And we are not quite half-way through the book. Get hold of a copy and read all of the collection through from start to finish. And then read it again. There is so much to amaze you. ‘A Whole Glade’:

Poem after poem has an astounding beauty. I am mesmerised by the fluidity of the writing, by the shapeshifting of the text, by the subtle meaning of each stanza. ‘At Dark-break’ (what a title):

This is nourishment for the soul. Which leads us to the last of these superb poems,‘The New’, an ekphrastic portrayal of all those paintings we have ever seen of the resurrection of the dead:

Souls like broad beans, fresh-thumbed. What’s not to like? Thank you Elizabeth Cook for a fine collection.