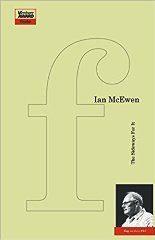 The back cover of Ian McEwen’s The Sideways For It tells us that the poems are “crafted to read as the eye leads.” To see what this means we can consider the first stanza of ‘The cartwheel’

Presumably the idea is that the reader can either choose to read down each column in turn as if it was a stanza or else read across the full width of each row and treat the whole thing as a kind of offset prose poem. McEwen’s skill is such that both ways give a plausible reading. Has his ingenuity extended to mixtures of partial downs and acrosses? Well, McEwen has an impressive background in mathematics so he might have allowed for all valid combinations. One might also wonder whether McEwen himself always performs a given poem in the same way at readings. (And if so, why?)

The quotation above does not show the other unusual feature of the book which is hinted at by the title. The poems are all printed sideways in order to allow space for up to five of McEwen’s distinctive slanting columns. This departure from normal practice is not, in the end, very significant once one becomes used to it.

McEwen has written poems like this before; but the unusual layout will no doubt be new to some readers – and bookshop browsers – who must make whatever they can of the flexibility offered them. My advice, for what it is worth, is not to be too distracted by the range of possibilities and first of all to read each poem consistently row-wise (or column-wise) to get its general flavour before tasting some of the available variations. But McEwen may well not approve of this strategy.

All the above being said regarding the idiosyncratic features of the book, I would like to address the poems in a more conventional way. The ones that work best for me are those which deal with concrete situations and have human characters; perhaps such content counterbalances the slightly vertiginous feeling the slantwise layout induces. Besides ‘The cartwheel’, already quoted, with its children doing gymnastics on the beach, I enjoyed ‘In arcade ego’ which features an amusement arcade owner with “breeze-block face” who “scowls at the only honest game in town” – a simple coin roll which solicits small change in aid of some worthy charity. Equally pleasingly down-to-earth are ‘Porlock permeable block’ (about a job being done for “the bloke next door” by workmen with a “hoarse yellow machine” assisted by two lads who are “dusty, muscled but unskilled”) and ’Covent Garden in three acts’ in which a mother grows impatient while watching a street entertainer and “belts the boy into the pushchair scissors off / can’t wait for the miracle from the man in motley.”

Another kind of entertainer – this time a musician (probably Miles Davis) – inspires McEwen’s gift for imaginative description. ‘So what?’ includes the evocative lines

In ‘Talking pictures’ a visual artist arouses similarly eloquent admiration and envy: “one picture to make 50 grand”, the poet exclaims and goes onto reflect on “the ease / the brush has, across the canvas” and how much can be accomplished in “what, fifteen minutes work? That’s how long / I spend to cut one word.”

McEwen’s sense of fun and fondness for word play has probably been detectable in the extracts already quoted. It is further illustrated by ‘If repetition’ which – rather in the manner of Stan Kelly-Bootle’s mock-dictionary definition: “recursive: see ‘recursive’” – presents us with a possible first line

and then goes on to celebrate the glorious failure of clouds ever to repeat any pattern they have once taken up. However there are less successful text games (to my mind) in ‘(Oyster)/Contactless ‘, which seems too liberally interrupted by parentheses. Furthermore, the use of repetitions and permutations in ‘Mirror Neurons’ and ‘A drill for trust’ does seem to me rather more mechanical than poetic – but even so each of these poems does offer at least one teasingly haunting line: the first one challenges us with the remark “at the skin every journey is surprised” while the second offers the intriguing image of “each loose crucifix/ dropped on the cold waterfall / like a handkerchief”.

There are further, more meditative, dimensions to this slim and unusual collection which have not been explored in the examples quoted. This is a book which gives readers a little more freedom than they may be accustomed to – which could be equivalent to saying that readers may have to perform a little more work than they are accustomed to. But I think most readers will find that any extra effort is well worth it.