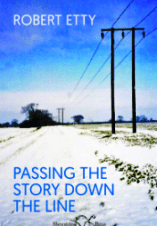 The cover image matches the title: flat Lincolnshire, a few bare trees, enough snow to almost cover the grass, and a line of pylons carrying their wires to beyond the horizon. It looks nothing much, yet if this is your landscape it is everything, and Etty has always celebrated Lincolnshire in his poetry. It’s not just that he has lived and worked here all his life; he is a poet who looks to the familiar, finds richness in the daily routines, and listens to the distinctive qualities in the people whose lives he knows. Their stories are passed on through the lines of these poems as electricity travels down the wires – indicative of the light-touch word-play that Etty employs, partly as entertainment but also as an exploration of vernacular language that is sometimes ours, sometimes Lincolnshire’s. He has a keen ear for humour and sharp observation of continuity in communities a long way from London. This might be his ninth collection but there is no slackening in his technique.

Down-to-earth yet with an appreciation of something transcendental in the ordinary: it’s all there in ‘A Winter Eclipse in the Co-op Car Park’, the opening poem. Winter, and a dull morning until the sun rises over an advertising hoarding, gilding everything and everyone –

That’s a long quotation but Etty isn’t a catchy-soundbite poet so only a longer extract will do justice to his technique; he builds up his poems slowly, letting the reader go through the same visual process that he describes. This scene has much in common with Stanley Spencer’s Cookham paintings where ordinary people are transfigured, momentarily, though with less of Spencer’s obviously religious purpose. There is, however, just enough religious vocabulary slipped in here – halo-ed, angel, unearthly, for example – to lift the poem into that same semi-religious register. The feeling that even the Co-op car-park can hold the possibility of a spiritual experience, however low-key, re-arranges our expectations. Etty’s language is colloquial and seems effortless but it takes confidence to write phrases like ‘the right size of slowing bus’ and ‘no more unearthly than average’, and to slip ‘ineffably’ into the narrative as though it is one of the easiest words to use. Not just Alan Alcock but language suddenly examines its own doubled meaning – here, ’a different complexion’, and this is a foretaste of the word-play that will be a feature of subsequent poems – none of it laboured but all of it lightly shared. Almost every page offers an example, as here, from ‘After You Didn’t Answer the Phone’ –

It’s better than banter and wittier than jokey; it’s the lightness of a poet who fits a companionable wit into the small exchanges of everyday routines, and knows how to balance the weight of one word against another. While Lincolnshire and its landscape is present throughout the four sections of this collection, it’s the people who inhabit the small town and countryside that engage Etty’s attention. They are named, giving the poems a deeper sense of reality – although whether they are literally ‘real’ I doubt. There’s ‘Mavis Bream from the terrace opposite / the carpet store at the top of the hill’ who tends her cascades of fuchsias (‘Upwards and Upwards’). Leslie Nesbitt (in ‘All-Time Football Story’) invents a past in which he was ‘…Sheffield Wednesday’s / all-time top-scoring outside-left …’

Etty uses these childhood experiences and their preparation for adult life to great effect. ‘Office Workers in the Gateway to the Last Field on Cow Pasture Lane’ moves between the lovers in parked cars – ‘A Hillman or Rover …’ – everything at the start of the poem is as exact as its title – Keith Madsen, who ‘cowboyed the milkers’ and so knew the routines , and ‘… Martin’s book / on Growing Up’ to show the various ways that sexual knowledge was built up. Pre-internet, there is an innocent comedy in this rural education:

Continuity of place and time, along with the accumulated detail acquired by those who live in one place, is something Etty shares and values while recognising, implicitly, that this is increasingly rare. ‘London’ defines the capital by its opening negative –

The rhythmic repetitions at the line ends – ‘He says’ and ‘He once’ – suggest that small interruption of time, that eruption of quickly-abandoned desire, which dissolved into staying close to home. After the first line, London disappears entirely, and the poem focusses on the poet asking Raymond about specifics, if he can name the trees along a ditch a couple of miles away –

While I’ve admired Etty’s poetry since first encountering it in the 1990’s (when he was also the co-editor of Seam magazine, and had pamphlets – as I did – published by Pikestaff Press) this is the first full collection I’ve read. Fortunately I now have time to fill in the gaps. It has proved very good company, not only for the stories and humour, but for the way in which Etty can work with language to make it playful, and both sad and funny at the same time. It’s accessible in the best sense: human life, in its variety and unpredictability, explored through a consistent generosity of spirit and insight.