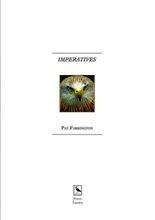 The 24 poems in Pat Farrington’s Imperatives span continents, moving between Europe, West Africa and Polynesia, while maintain-ing a strong focus on the natural world, our membership of it and relationships with it.

Perhaps the main danger in writing about nature and ecological issues today is that one may fall into the trap of easy oppositions between aggressor and victim, with humans ravaging the innocent earth. In this collection, Farrington does come close to this line of argument, as in ‘Through a Por-tal’, where the city is “the Great Wen disfiguring the land” and towns are “urban mould”, while the earth is “the maternal belly / the source of becoming.” And her Earth Giant is (enjoyably) “angry, bone-angry, with the changes he sees.”

However, Farrington is able to move beyond preaching, and in most of these poems Nature is cer-tainly not romanticised; in fact there’s a constant undercurrent of cruelty or danger, “the world’s chill”. I liked the frequent, bracing sense of evolution going about its own business so that (as de-scribed in an under-sea scenario in ‘Another World’), “witnessing, I flinch.”

Looking down from space, or scanning the land from the perspective of an angered Earth Giant or a witness of apocalypse, the poet almost always zooms in before long to consider nature in close-up. Perhaps the main ‘imperative’ here is to look closely, and then more closely still, at what is around us and at what is endangered. The work speaks of a commitment to what we think of as ‘nature’, a concern about its destruction, and also an awareness of the ‘otherness’ of nature. In the final poem, only cats out of the animals we usually anthropomorphise emerge as apocalyse survi-vors – in company with “insects, rats and scorpions.”

This makes for some intense and beautifully-observed imagery (for instance, I loved the poppy’s “stamens curled like sultans’ turbans” in ‘Dynamo’). On occasion though, the wealth of descriptive detail becomes overwhelming and threatens to drown out a poem’s effect. There were some where I felt a need to stop to draw breath.

In the first poem, ‘Essences,’ we are in Corfu; the reader is entangled in a “thrumming harmony” of sounds, sights and movements – a snake is “intoxicated by wild garlic and thyme”– to the point that the accretion of sensory language starts to become stifling. I was relieved to discover in the last line the salty surprise of “a whiff of Pan’s foetid smell.”

The poems dealing with Farrington’s experiences in Africa are particularly lively. There are pages that bristle with insects, such as the scorpions evoked with a kind of gleeful horror in ‘From the Un-derworld.’ These “devils…. hardened in the fires of hell” become emblematic of a more general evil, pursuing the writer across the world, to reappear in France:

I found these uneasy glances at plants and creatures particularly interesting. ‘No Quarter’ is also unusual in this respect; the poem starts with the well-known topic of a mechanised attack on the countryside – demolition carried out by “metal mandibles” and “fat-bellied mixers” – then moves on to plants that act in equally re-morseless ways – “battalions of ivy” that

There are other surprises: I en-joyed the way, in ‘Elegy for an African Home’, Farrington works through a Google-powered exami-nation of the place that was once her home, to a point where any closer, “pixels will burst like over-ripe fruit”, then allows this image to take her back to a memory of

Although the poet is often present, witnessing these scenes, I sometimes found myself looking for more sense of her own connection to what is described so carefully. Where this is achieved in a few words, as in ‘Custodian’, the whole poem becomes more effective. Digging in an allotment, the narrator starts to feel protective of a newly-planted sapling, reflecting on the possibility that it may not survive. In the regretful phrase “no leather-clad seeds to start again” I sensed a subtle allusion to the poet’s own feelings of impermanence.

I think I found most to admire in the poems with a lighter touch, where one or two images are allowed the space to gather strength and speak for themselves. For me, ‘Into Being’ and ’Figures on a Landscape’ stand out. A zoo gorilla shows mercy to a small boy who has fallen into his compound,

And in ‘Figures on a Landscape’, the subjects lightly painted in oil