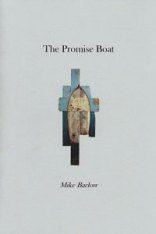 I am an admirer of Mike Barlow’s poetry. This collection The Promise Boat does not disappoint. Here we find stories, steeped in mesmeric imagery, of voyages and of islands. A stranger pacing the pier calls us to the Promise Boat, “an old lifeboat, clinker-built remnant … packed to its quota and always room for more.” “And have we paid or are we chosen?” is the question – but an anwer is not readily forthcoming. Perhaps we are refugees; perhaps we are souls setting out on our final voyage. We are heading each to our “own horizon, private and particular”. Possibly we will never reach our empty beach, our island paradise, for in the final lines we learn there is:

This is imaginative work. Barlow’s poems continue, throughout the collection, to be arresting, evocative, tantalising. ‘Land on the Port Bow’ is imbued with a deep air of mystery, portraying the dreams of a weary ship’s crew whose “land-starved bodies” long for home –

What do we make of this beautiful and mystifying passage? I construe it as tired landed souls tricked by a mirage of their desired goal, by a Fata Morgana, as indeed we read in the poem immediately preceding: “… out on the horizon land appears where I know there should be nothing.”

Meanwhile ‘The Pall Bearers’ carry out their arduous task:

The lines are an evocation of the sculpture ‘The Journey’, created in 2008 by Fenwick Lawson. It stands in the precincts of Durham Cathedral: six hooded monks carrying the coffin of St Cuthbert away from Lindisfarne. This enig-matic poem is touched with a feeling of splendour:

Barlow senses the mystery of the pall bearers who move across the sand – who then step further away as we watch.

Historically, the monks made a long and tortuous journey with the remains of St Cuthbert, from Lindisfarne to Durham, where the saint’s tomb is now situated. In the poem, however, it seems that the little procession is going to be swallowed by the sea and will end in the debris of the tideline. Do we assume that the tideline is at Holy Island? How then will they make it to Durham? ’The Pall Bearers’ asks us questions to which we must give much thought.

We are taken to many islands in the Promise Boat: to Lindisfarne, to the island of the MacNeishes in Loch Earn, to the Isle of Discussion, to Empty Isle, to the nothing island of the Fata Morgana. The islands are populated with gulls, gannets, fulmar, puffin and shag, with broken timbers, our own dark spectres, and with “a boy child swimming for his life, his murdered clan behind him”. There are many mysteries. There are borders too:

The poem ’in the land between borders’ tells us:

– and at the last, in ‘They came down from the north’:

I will guarantee that when you, too, read The Promise Boat, its poems will stay, bedded down, in your mind, and you will be all the richer for the experience.