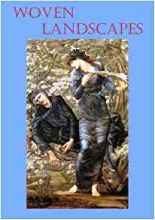 Woven Landscapes is an anthology of six poets, Roselle Angwin, Wendy French, Katrina Porteous, Anne Caldwell, Kaye Lee and Katherine Gallagher. Fewer poets mean there’s space for several poems by each poet which gives a reader chance to get a feel for what a body of work might be like. There’s no introduction and no sense of why the anthology was compiled. The landscapes are both internal and external, often with the external reflecting the internal for example in Roselle Angwin’s ‘For What Remains Unspoken’

Magpies are intelligent birds who know the tabby isn’t an immediate threat, but they keep watching. They know movement will attract the cat’s attention so they keep still. But they will be ready to move if the situation changes, e.g. if the cat does become an actual threat. Similarly, the ‘you’ of the poem holds knowledge still, lets it weigh her down until the right time to release it. Wendy French’s ‘Untitled/Unamed’ also looks at held knowledge, this time in the memory of how a plate got broken,

The poem doesn’t reveal why the plate was purposely broken but it acts as a reminder that attention isn’t always good and offers comfort to someone whose faded looks render her less visible.

Anne Caldwell’s prose poems look at Salford with the unfamiliar device of a non-native puma, in ‘Salford (1)’

The detailed focus on the commonplace allows the exotic to be overlooked because it is so out of the ordinary and contrary to expectation. Kaye Lee’s ‘Building with Sand’ looks at expectations,

The children allow their sandcastle to convince them of their own invincibility and confidence in their futures, while other sandcastles are demolished by the tide. Their plotted futures have yet to encounter obstacles that might push them in a different direction or lead to failure. Interesting too that the girls’ focus is on success in the domestic sphere: this is a homely sandcastle, not a science lab. Katherine Gallagher’s ‘Suburb’ (complete poem) also looks at domestic ambition,

It’s noticeable that this domestic ambition is about conformity. The cars may be different but they are still tidied away in their allocated slot. It’s also noticeable that, apart from the lawn-mowers, there’s no human activity. The suburb is a place of retreat and of keeping things in their place.

What links the poems in Woven Landscapes isn’t just their theme but also craft. Unlike the bungalows in Katherine Gallagher’s ‘Suburb’, these poems are individual and have distinctive voices.