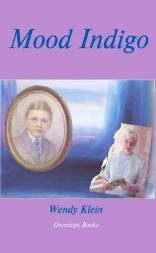 The Colour of Experience: Brian Docherty’s review of the new collection by Wendy Klein

Once again, I am pleased to review a book by a mature poet with something to say, and the skills to make the experience worthwhile. This book, Klein’s third, takes its title from an early Duke Ellington jazz classic regarded as ground-breaking in 1930. That title refers to a most severe form of the Blues, but anyone who went to the recent exhibition of American art from that period might recall Aaron Douglas’ painting ‘Aspiration’ (1936), which shows three indigo figures. The book’s four sections move the reader through a panorama of scenes from childhood to more recent events in London.

Section 1, ‘Legacy’, shows us a selection of early life experiences, such as ‘Stewed Fruit’, where the narrator recalls her grandmother

the poem finishes with ‘a crazy poetry‘

Indeed. ‘Pairings’ moves on to wise words from the same grandmother, figs and cheese as a pairing, a metaphor for a loving relationship, with an opening line that might allude to Shakespeare,

More fruit and plant material comes up next, with ‘Dusty Millers’, a hardy perennial, Senecio cineraria. This poem is in couplets, a form favoured by Klein, while Grandma Rae gets name checked in a piece about two naughty cousins, and Aunt Ruby features in a poem about everyday life in the rural American mid-West. This same landscape, and cousin Penny, re-appear in ‘In Black and White’, where the narrator infers details about her mother’s earlier life from a small photo with a notation on the back, which says

Memories and mysteries are well evoked here, with the implication that there may be parts of our family histories that we will never know. This first section finishes with ‘Legacy’ where

We also meet an equally well-travelled photo of ‘ghosts’, her mother’s family,

Section 2, ‘Seen From Below’, is a sequence of poems about the poets’s father, all in longer-lined couplets, which starts in Manhattan in 1913, in sepia, when he is a military cadet. He is someone who aged well, and there is enough material here for a novel. In ‘My Father Sets Sail, he is shown with a teddy,

By ‘Who-am-I Blues’, the family seems to have a new life in California’s San Joaquin Valley, although the next poem describes him as still a ‘city man’, who nevertheless enjoys camping in the High Sierras. The book’s title poem shows the narrator starting to grow up, and her relationship with her father changing. Nostalgia for his New York life figures here, with the Duke Ellington 78 rpm record of the title deployed in dancing lessons as well as stories that might or might not be true. A bygone era is evoked here,

This has echoes of Kenneth Rexroth’s An Autobiographical Novel (so titled by Rexroth for very good reasons) while the portrayal, and obvious affection for jazz, recall Jack Stanley’s poems. ‘Counterpoint’ follows the consequences of such behaviour, finishing with the poet remembering both parents,

Father’s last wish is for a pilgrimage to Dylan Thomas’s Laugharne; whether that is real or imaginary is left for the reader to decide. This section ends with ‘My Father as the Picture in the Attic’ a title which might put some readers in mind of Edgar Allan Poe or Oscar Wilde. In this section, we follow parts of a man’s life journey, ending with him being declared no longer fit to drive.

Section 3, ‘What Paradise Means’, starts with two pieces that might be holdovers from the previous section, before moving on to ‘The Way They Danced at Zalongo’, an episode in the Souliote War, where a group of Greek women committed suicide by leaping off a cliff with their children in their arms. This moving piece was a competition winner. ‘Friar Mendel’s Children’ features a speculation about the private conduct of pioneering geneticist Gregor Mendel,

Mendel’s genetic experiments are said, by the writer, to be concerned with paternity and biological infidelity. ‘Tacking the Wolf’ presents us with a harsh lesson‘that the wolf cannot be saved’; while ‘The People of the Sahel consider rain’ is a moving and powerful poem on drought as a life-changing event. ‘Morning News’ moves the reader into the present and recent events in the Thames Valley as reported on the Today Programme. These reports of flooding contrast effectively with ‘The People of the Sahel consider rain’ – inviting us to consider what those people would give for an English downpour.

Section 4, ‘The Missed Chance Of Salvation’, opens with a prose poem, from a writer old enough to have a ‘moth-eaten Aldermaston duffle’, facing the fact that she really is old enough to recall those sandwich board men proclaiming that the end of the world was nigh, and realising that she now

Yes, poet as concerned citizen, as witness; as a potential sandwich board woman. Facebook anyone? The book’s next poem, ‘Nothing to declare’, is about being in the moment in France, while ‘Saudade’ returns the reader to an adolescence that might or might not be the poet’s, a theme continued in ‘Five years of Growth‘ which finishes

In this section, we also have poems about dreams, travel and loss, and Autumn in England, while ‘Cul-de-sac’ is emblematic of a life. The book’s final poem, Rug‘ opens

A cheerful note to end the book on, you might think, but Wendy Klein has taken the reader on a journey from her early life in America, with reminiscences of her family, especially her father, to poems of political and social comment, and other pieces set in the more recent past. This book is a well -considered whole, and merits your attention. Other poets on the Oversteps list at the end of the book are also worth checking out.