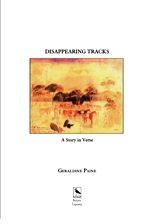 Today’s relentless search for novelty – endless talent shows, ever-faster editing of films, the plethora of blogs and platforms which chart the minutiae of every life – should surely be something to which poetry is immune. In the best cases, that is still so. But occasionally editors (and poets) can be seduced by the new, the innovative or simply the modish to the exclusion of a piece of work which exudes more traditional virtues: character, heft, an effortless precision of language. Disappearing Tracks is just such a book, and is a pleasure from beginning to end.

It doesn’t attempt anything fancy, at least in outline – from the back cover blurb to the acknowledgements and further reading, we are given to expect something solid and straightforward: James Fraser (English, Protestant, upper crust, artistic) and Helena Donnelly (Irish Catholic, down to earth, in service) meet, fall in love and after many travails in the baking hell of 1850s Australia, marry. The poems, we imagine, will be similarly direct, exploring their relationship and its up and downs, perhaps following a few bumps in the road, but delivering us to the anticipated happy ending in a brisk, uplifting narrative. And in reading through, this is certainly the case – the poems are solid, dependable, and the story keeps up the pace – but it is far from everything the book has to offer. As Geraldine Paine notes at the head of the story, “James Tatton Brockman Fraser … arrived in Australia in 1852 … He was the official artist … of the Austin Expedition to the Murchison, Western Australia. Helena Donnelly, an Irish immigrant, set sail for Australia … in 1850. That same year, she went into service. They were my great-grandparents. This could be their story.”

At once the given facts are set up and contradicted by a richer, more emotive truth in that single word, “could”. What might have been some sort of Catherine Cookson-in-verse (which could have had its pleasures) is complicated immediately, from the first page, in a poem detailing the journey out:

Helena’s voice is arresting from the start – protean, authentic, possessing a full range of registers and tones, from everyday practicality to despair, ecstasy and the tragic. Over the course of sixty pages it is measured against the worst a harsh climate, indeed a harsh century, can throw at it, but is steadfast and true to itself. In a diptych poem, ‘The Meeting, Wanstead Lodge, Fremantle, July 22nd, 1853’, James’s cool analytical tones (“I am come to a house with a piano … She does not dance but waits/on dancers”) are marvellously contrasted with Helena’s notes of vibrant passion and self-doubt:

It is a tremendous performance, a complete entering into the spirit and mind – the skin, the lungs – of a character, without a single false note, or any reach for meaning beyond what emerges naturally from its setting. Helena is so much more than simply half of a couple advancing to its happy ending.

Yet what of James? Perhaps a fiery, conflicted working class character is easier to render than a stiff-and-starchy aristocrat, all buttoned up against fate and the rigours of a savage land? Not so – and here Paine comes into her own. She is careful to flesh out his nature in as much telling detail as Helena’s; and, to be fair, there are challenges to this which are inherent in the story: his is the distant, disapproving Protestant family, whose active frowns must be conveyed by letter from thousands of miles away; his the greater share of misery, both physical and spiritual, in the endless deserts that tear at the character, even of those native to the land (who incidentally are more than mere background figures, and acquire a lively narrative presence of their own); his, ultimately, the pressure of bearing up under intolerable stresses and maintaining the dignity and calm demanded by his station.

For the challenges of a mounted expedition are enormous, the party by the end losing two thirds of its horses to heat and poison:

It would be easy for the poet to find in James’s necessary demeanour a crude black-and-white contrast to Helena: he lofty, stoic, obsessive, even, the archetypal mad Englishman out in the midday sun; she fiery and authentic, with a lilting powerful voice that throws her up off the page. But despite the solid, linear nature of the narrative, she resists such easy characterisation, producing a story as complex in its tone and shape as the differing lives it brought together. In ‘Yalburning’, for instance, we find the whole range of James’s voice –
plaintive, loving, despairing, even comic in its starchy conclusion:

It is no easy caricature, but a complex, nuanced voice, quite the equal of its female partner and as splendid a creation. We do eventually get to our promised happy ending, stated simply in a coda – “James and Helena were married according to the rites and ceremonies of the Roman Catholic Church by Father Salvador Ribaya on January 23rd, 1855, in St Patrick’s RC Church, Fremantle, Western Australia. They were together for fifty-seven years” – and when it comes it is moving. This was, after all, the story of real people’s lives. But the book’s magic derives from the journey, not the story alone – as sweet, subtle and complex as the expedition through the desert was bitter and coarse, and all the more satisfying for its growth, power and endurance.