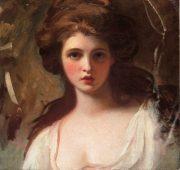 Posterity remembers Emma Hamilton as the mistress of Nelson.

The reality is her achievements in the society salon were in their way as brave and out of the ordinary as his naval exploits.

The maritime museum at Greenwich, where one can almost smell the salt of the high seas, is a fitting place to tell the story of how an 18th-century daughter of a blacksmith and a servant dazzled the beau monde, became fluent in French and Italian within the space of a year, married an aristocrat who was also a diplomat and played her own role beside him in international affairs.  She then fell in love with his friend, the nation’s hero Horatio Nelson, and their affair became the scandal of the age.

So far it’s a tale of female power.  The final chapter is the opposite: following the death of her male protectors, Emma was flung into the debtors’ prison.  Once released, she fled to Calais to escape her creditors and there she faced poverty and an unglamorous death with Horatia, her daughter by Nelson, beside her.

Emma’s great natural advantage was her beauty, which then – as on occasions now – was a commodity and as a teenager she took herself from her native Cheshire to London to trade it.

After meeting a maid who wished to be an actress, she found herself in the district of Covent Garden, renowned for sexual services that were vividly described in the monthly publication Harris’ List of Covent Garden Ladies, subtitled Man of Pleasure’s Calendar.

That Emma is remembered when most of her contemporary Covent Garden ladies were forgotten is testament to the force of a personality that made her not just a passing fancy but an obsession for painter George Romney.  He painted her 70 times after his friend Charles Francis Greville had requested a painting of his mistress.

More than a muse, Emma was a collaborator with acting skills that allowed her to throw herself into the part of a Bacchante adorned with vine leaves, Shakespeare’s elegant heroine Miranda or a fortune teller as the mood took her and the painter whose works fill this exhibition.

The artist’s commissioner Greville may have loved Emma, but having such a high-profile mistress was an obstacle to his plan to marry an heiress.  He therefore convinced his uncle Sir William Hamilton, who lived in Naples, that Emma should be despatched to live with him.

“The prospect of possessing so delightful an object under my roof soon certainly causes me some pleasing sensations,” he wrote.

At first furious at the betrayal, Emma wrote eloquently back from Naples to Greville: “You used to envy my smiles, now with cool indifference to advise me to go to bed to him…  If I was with you, I would murder you and myself boath (sic).”

She soon recovered her poise, however, as life in Naples offered her a cultural education and ultimately marriage to an aristocrat after she won him and his entourage over with her famous “attitudes”.

The exhibition gives us a chance to witness this rather quaint and, for a modern-day feminist, unsettling art form as an actress playing Emma poses as a series of characters from classical literature, transforming herself from the beautiful object Sir William had added to his collection of antiquities to a living, breathing work of art.

“Sir William has plucked her,” says one of the imaginary audience, as we watch Emma shift from Medea to Ceres.

The positive was that Emma got a great deal from the bargain.  In one of the many letters displayed in the exhibition showing her scrawling hand, which was nonetheless a triumph considering her total lack of formal schooling, she writes to Sir William’s niece:

“I feel a sort of enchantment every moment I say to myself I am his wife…  Surely no person was ever so happy as I am.”

At last, Emma had domestic stability and more or less social acceptance, but the arrival of Nelson in Naples was to disrupt all that.

By all accounts, Emma and Nelson rapidly fell in love and the elderly Sir William bore it well.

Emma teasingly referred to the Tria Juncta in Uno (three joined in one), a reference to the motto of the Order of the Bath, which both men had, and of course to their ménage a trois.

Maybe they could have continued happily enough in Naples, but domestic bliss proved elusive in England, where the trio retreated from the revolutionary tensions that swept France and Italy.

Emma, whose fortunes had depended almost entirely on winning the attentions of men, found herself bereft of support after Sir William died in 1803 in his 73rd year and Nelson in 1805 at the Battle of Trafalgar, aged 47.  His dying wish was that Emma should be provided for, but society ignored him.

In her destitution, to settle a debt, Emma had to pledge her most cherished possession – Nelson’s undress uniform coat and waistcoat that bear the marks of the fatal wound he suffered at Trafalgar.

Combined with everything else on display at this lucidly curated exhibition, these blood-stained, bullet-torn clothes confirm our sense of connection with the extraordinary protagonists of an extraordinary love affair.