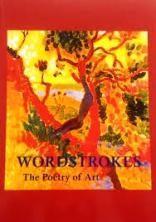 Playing with ‘The Rules’: Brian Docherty considers an anthology whose poems could be viewed as case studies in ekphrasis – but also as much more than that.

This book’s brightly coloured cover image by André Derain offers an attractive entrée to this Anthology of ekphrastic poems by a range of well-known contemporary poets such as Mimi Khalvati, Linda France, and Ian Duhig. As far as I can tell, none of the work reprinted here was specially commissioned, although since the book lacks an Introduction or even a Preface, the selection process remains opaque. Nevertheless, it showcases a range of mainstream work (nothing ‘linguistically innovative‘ here) on a common theme with enough variety to sustain the reader’s interest. In addition to making a fine gift, this book should prove useful to teachers of creative writing. (And of course, many of the poets featured teach Literature or Creative Writing; on their Reading List? Why not.)

Ekphrasis, or creative writing responses to works of art (i.e. not journalism or art criticism) has become ubiquitious since Keats‘ 1819 poem, ‘Ode on a Grecian Urn’ if not before. Notable twentieth century exponents include William Carlos Williams, W.H. Auden, and Derek Mahon. Its use in writing workshops and creative writing courses has been widespread for at least twenty five years since Sean O’Brien’s exercise ‘The Rules’ escaped into the wild. (There is a slightly different version in Matthew Sweeney & John Hartley Williams’ Writing Poetry and Getting Published, (Hodder & Stoughton, 1997). As a first person monologue, it is useful in teaching mixed groups of poets and prose writers, although it should be noted that not all the poems in the anthology here are such monologues.

This reader must also report that for him, not all the poems collected are equally successful. It would be unfair to single out any, since other readers may well disagree. That is one of the virtues of this sort of anthology; there is something for everyone, and different readers will have different favourites. Let us then give a flavour of the book. Moniza Alvi’s ‘I Would Like to be a Dot in a Painting by Miró’ takes a well known abstract artist, and demonstrates that a response to this sort of work from the inside is well achievable

Susan Williams’ ‘Ophelia Drowning in the Tate’, a reading of a painting by Millais, gives Ophelia a voice

This dramatises the painting according to O’Brien’s exercise, without merely describing the work. Patience Agbabi, on the other hand, in her poem, ‘About Face’, which references the classical legend of Actaeon and Diana, without citing a specific painting, is a mirror poem in two stanzas featuring a narrative voice that could easily be Agbabi’s

The poems first/last line, ‘Actaeon, you’ll pay the price for looking.’ leaves the hapless Actaeon in no doubt as to his fate. Notions of identity and belonging are also embedded in this text. Wendy French’s ‘Sunflowers’ with its epigraph from Sappho, is a reading of Van Gogh that places the poet in an art gallery that could be the Van Gogh Museum in Amsterdam, or the Foundation Vincent Van Gogh in Arles. The poem takes the reader from the street outside, where

The second stanza moves us inside the gallery, before returning to the outside world, where sunflowers, rather than a postcard, are purchased. Linda France, in some respects a bolder poet than French, returns our attention to the first person monologue of ‘The Rules’. Her ‘Self Portrait‘, featuring an epigraph from David Hockney, ‘Don’t deny the first reality in front of you‘ gives a voice to (presumably) Hockney

This practical no-nonsense painterly voice may or may not mimic that of the actually existing David Hockney, but it nevertheless convinces. In ‘Anniversary’, Michael Schmidt ventriloquizes a character from Paula Rego. The mysterious, disturbing, boldly coloured and figured work of Rego obviously strikes a chord with Schmidt. No half measures here.

In ‘Susan Martin, Painter’s Wife’, Linda France gives us a monologue in the persona of the widow of English artist John Martin (1789-1854)

This painter’s wife seems to share the perspective in Carol Ann Duffy’s ‘Standing Female Nude’, disillusioned and unimpressed by the art. The poem finishes

Another poem by France, ‘Two Nudes’ is a response to Frida Kahlo’s work, apparently spoken by Kahlo to Diego Rivera in 1939. Kahlo’s voice here is intimate,

Another first person monologue gives a voice to Shakespeare’s Titania in Susan Taylor’s poem ‘Titania Wings’, after Titania by John Simmons (1866). We appear to be in a demi-monde of Victorian decadence here, and Taylor focuses on the sensuality of detail, while the self-referential voice given to Titania makes the reader aware that the character in the painting knows she is the subject of the artist’s gaze as well as the reader’s. She tells painter and audience

Anyone who thinks this may be problematic from a feminist perspective is no doubt correct, and would possibly reference Lorraine Gamman’s The Female Gaze, Camille Paglia, or Griselda Pollock. Readers will also have noted that this review has picked out only a few poets from the many fine writers gathered together in the book. This is one of the pleasures of an anthology, as noted earlier, that every reader can pick out their own favourites, and recommend those poems or poets to friends. As usual, a note of presentation; there is no excuse for poorly printed or produced books nowadays, and this book does not disappoint in that respect. Despite the lack of an Introduction or Preface, this anthology can be recommended as a welcome addition to your bookshelf, as a decent gift, or a classroom or course resource.