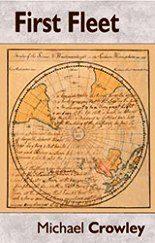 At first glance, Michael Crowley’s First Fleet appears to take an enormous risk – the collection is billed as a sequence, with all the usual apparatus (compact, informative foreword, source materials credited in the acknowledgements, pen pictures of key characters) as well as blurbs that concentrate on the nature of the historical narrative, and reads this way until two thirds of the way through the book. Then the collection pauses with a section break and immediately begins a second portion, ‘Time Signature’, that seems to dispense with history and work much as any collection would, a mix of forms and styles exploring contemporary themes. It is something of a hitch, leaving the reader to grapple with this change of gears unprepared.

However, looking back, it is a gamble rather than simply a risk, and one which pays off handsomely.

The first section smoothly lays out the fate, travails and occasional triumphs of the 800 convicts shipped off to Australia (“what was then called New Holland”) and interweaves with them the stories of the sailors, administrators and Aboriginal people conscripted into the mission of building a colony. As the poet notes, he tried to fill in the missing spaces in the historical record, the voices of those under the lash, to leave them “occupied with poetry”, and succeeds wonderfully. He is not stinting with form (several sonnets reflect the bitter, educated despair of chaplains and surgeons), tone or subject matter, allowing the voice and feel of each poem to emerge from vivid experience and to stamp itself on the page. In ‘The World Dried’, for instance, “Jane Fitzgerald on the death of her infant son James”, though the notes can give only the harshest summary of her life (“She was sentenced to twenty five lashes for disobedience. Little else is known”), it springs out in full humanity from the poem:

This touching image is perhaps the mildest example of the convicts’ experience, almost a loving death. Jane Fitzgerald again, in ‘Healing’, remarks quite matter-of-factly on the horrors of the Australian climate – “I dread the flies that’s all. Footsteps along my wounds,/ the shiver of their eggs” – or Surgeon White in ‘Galgalla’, exercises his scientific muscles in the face of destruction:

It is to Michael Crowley’s considerable credit that from such a slew of dispiriting material – crude justice, banishment, torture and coercion, semi-starvation, the ravages of disease and violence – he is able to source small moments of hope and faith that sustain us. The life of the colony is almost unimaginable, yet has been imagined in telling detail.

It is done so well, the the shift to the contemporary third of the book can feel jarring. What do elegant sequences on subjects such as the Gower or Mid Wales Triptychs have to do with the hardscrabble life of early Australia? Or a neat sonnet depicting John Wesley’s establishment of a Yorkshire chapel? Or memories of a visit to the Ireland of the Troubles? At first glance, little. But in light of a key bridging poem, ‘The Fatal Shore’, which harks back to the historical source material and juxtaposes caricatures of modern Australia with the implacable harshness of the eighteenth century, things become clearer:

The poem dwells briefly on the pleasures of modern life, but cannot help returning over and over to the powerful knowledge of what happened to make that life possible. It is a subtle theme weaving its way through many other poems in the last third of the book. Part III, ‘Church’, of the North Gower Triptych recalls with some poignancy the feeling of the church that the chaplain earlier strove, unsuccessfully, to build from the unyielding clay of the shore (as incidentally does ‘Hill of Faith’, the Wesley poem); ‘Folly’ in its recounting of twin tales of love’s comfort and life’s danger, in the form of a shopping centre’s structural collapse, calls back to those brief moments of stolen pleasure against the brutality of early Australia; and perhaps most strikingly, ‘Bats’, which directly reprises the fruit bats twitching in the fig tree from which a convict was hanged by bringing the creatures back to life, Dracula-like, in the modern era:

And this is the book in a nutshell. There were different options – Crowley could have chosen, for instance, to intercut related contemporary poems with a historical sequence advancing by stages, making more manifest the connections, and amplifying the historical resonances – but in cutting apart past and present in the way that he does, the poet invites us instead to change gears with him, and make the connections for ourselves. We can indeed go inside – history, narrative, lyric – and drawing close, better feel the pain and the small lasting light from the most brutal aspects of the past. It is a journey in the hands of a skilful captain.