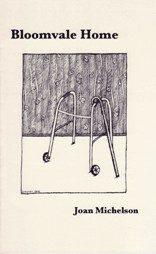 Kate Bingham praises Joan Michelson’s eye for the details of life in a retirement home.

The poet Joan Michelson isn’t much interested in words, she’s interested in people. Instead of language, she’s drawn to facts and stories. Her voice is conversational, driven by an iambic pulse; she has an ear for how people speak and a particularly inquisitive and unsqueamish eye for detail. Her poems are simple but, in this new chapbook, also often profound.

Bloomvale Home is a fictional version of the institution Michelson’s late father lived in, and its Residents are a classy bunch: there’s a retired head-teacher, a psychotherapist, a Viennese singer, a pianist, an organist, a judge, and no fewer than three professors. Some are dementia sufferers, others are frail, others just old: Parkin, who ‘bleats, baas, caws, slaps his arm’ alone in his small room, seems lost to the world (‘Parkin’); but lively Dr Borrisov flies ‘Boston-Newark for a day of teaching’ once a week (‘Psychotherapist’). In spite of their differing qualities of life, all face the same narrow future: hospital, rehab, nursing home, hospice. Some disappear, or are placed ‘elsewhere’, some ‘go’ suddenly. Death is matter-of-factly expected, if not present, on every page, and it provides both context and subtext for each well-crafted individual story.

In ‘Rose Kreiger’, Michelson reveals a second theme: like Leon’s granddaughter ‘who’s travelling with a backpack’ and ‘trying life on a kibbutz’, the Bloomvale residents have moved away from the bulk of their lives and carry just the essentials into their own communal experiment. With few possessions, separated from family, and often confused or forgetful, these characters seem even more brightly individual. Good writers always know how to make detail tell, but not many do so with the compassion Michelson – correctly – trusts will lead her to the heart of each poem. From what they eat for breakfast to the way they park their walkers, the details she picks out seem to reflect each individual’s fate: the judge counting sugar into his porridge like years of a sentence; the organist paying his debt to the church that has ‘given him so much, seen him through // his diabetes, his prostate, his triple bypass,’ no matter how awful he feels, who ‘is always ready to give his version’ of the sermon (‘The Organist’); the ‘Ex Exec’ who trembles even as he takes control of his girlfriend’s wheelchair, steering her away from the competition; the psychotherapist who flies out of life much as she flew to work: ‘Never mind that she’s eighty-nine./ She loves her work. It’s how she lives’ and whose daughter, after her death, ‘passes on her lumbar pillow // to Professor Charles on the floor below’. There is plenty of dry wit and irony here too.

Never sentimental or self-consciously poignant, these poems are instead irrepressibly curious about the practical aspects of life at Bloomvale Home, and Michelson does not look away tactfully from those simple everyday tasks that have become too much for her characters to manage alone. Instead, she celebrates their small domestic triumphs as feats of strength: the judge, independent to the last, ‘shrugs off help … As things stand, he can dress himself. // The trickiest are the buttons on his shirt’. Gerald the organist counts steps. Su Wu, who speaks ‘a hard-to-catch American-Taiwanese’, extends her fastidiousness to the increasingly frail Warren, buying him ‘bib-clips on a chain’ to help him keep his shirt clean while eating.

Sometimes these practical workarounds go wrong: in ‘Singer from Vienna’, a new waiter orientates ‘blind Julia’ to her breakfast: ‘It’s in front of you at six o’clock, Mrs Golden’, inadvertently upsetting her fragile sense of time and place. And, of course, sometimes death or illness cruelly intervenes. Here again, where a more circumspect poet might look away, it is Michelson’s open curiosity – her interest in people – that makes the poem. In ‘Su Wu’, perhaps the most powerfully realised poem in the book, Warren comes back from ‘the Nursing Home / from which few returned’:

To go without pudding is surely a first world problem, but in Bloomvale Home Michelson creates a world within that world, very small, very spare, but no less raging with love and disappointment, where Walter’s return is a coming back from the dead, and the life he comes back to, in Su Wu’s eyes, no life at all.