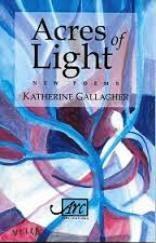 There comes a point in the writing life of any poet (let’s not use the word ‘career), when their (published) work changes, if not develops. As a well-travelled Aussie ex-pat who has lived in Paris and London, Katherine Gallagher has a lifetime’s experiences to draw on. This book’s 5 sections take the reader through a selection of these in the often spare and understated style for which her work is known. Anyone seeking the vibrancy and drama of say, Ruth Padel or Pascale Petit should look elsewhere.

In Section 1, we find ‘Elan’, one of a number of poems set in public parks that occur throughout Gallagher’s work, where the narrator experiences Holland Park in April, while listening as

We move on to Chartres in ‘A Measure of Stillness’ and ‘The Spell of Fireflies’, a nominalist poem about values and experience, which concludes

Her ghazal, ‘The Fire’ works rather well, while ‘Turnabout’ records aspects of a writer’s life,

This is contrasted with a frankly postcard poem, and ‘Quotidian’ which uses a line by Mahmoud Darwish, ‘we love life wherever we can’ to good effect as a refrain.

Section 2 takes us back to Gallagher’s Australia, with a series of memorial poems for her mother, starting with ‘I Could Have Been Born in a Taxi’, an almost Zen-like What was your face before you were born moment. The three poems for her mother focus on specific detail, such as the ring she inherited, described in ‘Rings’ as

‘Odyssey’ is another travel poem, which opens ‘Remembering the lights of a hundred cities’, moves through a range of experiences before alighting in London,

A more low-key sort of travel is evoked by ‘Riverboat’ in southwest London, where travellers and couples meditate on

‘Before the Storm’, an ekphrastic piece responding to Sven Richard Bergh’s painting Nordic Summer Evening, uses a longer line in a version of William Carlos Williams’ step down foot; this poem and the ghazal show that Gallagher can give careful consideration to appropriate form without resorting to outmoded ones. A later villanelle is also well handled, as is a more ‘English’ mode, such as the tightly rhymed quatrains of ‘A Cautionary Tale’. This poem finishes

Whether this is ‘after Betjeman’ , a nod to Stevie Smith (a poet greatly admired by Gallagher) or a comment on why Crouch End, for example, is known as Nappy Valley, can be left for readers to decide for themselves. Her ‘Beatles Poem’ though, while an enjoyable idea, is less successful for this reader precisely because the raw material is relatively loosely handled. Her haiku sequence works well, as she is well aware of some of the debates on whether English or American ‘Haiku’ can really achieve the effects available to Japanese speakers and writers. One example here is

The departure from the conventional 5-7-5 either needs no explanation or could have been relegated to an end note at the back of the book. ‘The Dream is the Ocean’ is a more ‘New Age’ type of poem, which achieves a balance between repetition and moving on, in seven couplets, although printed as one stanza.

This sense of untarnished memories permeates the book, as in ‘The Mountain’ an example of a well-crafted villanelle, where

There are more travel poems, including an ‘Ode to the Boeing 747’; as we have seen, Gallagher is a well-travelled poet, and notions of belonging, exile, and returning recur on her work. This section also features some political commentary, handled with restraint, as in ‘Photograph – Mekong Delta, South Vietnam, 1965’ dealing with the many photograph or pieces of newsreel footage where women were brutalised and executed in public. A short sequence, ‘Ireland, 1972’, perhaps a nod to Gallagher’s Donegal roots, is written in short, Heaneyesque lines, noting

Section 5 features a series of elegies, presumably for family or friends, where ‘Going Back to the Farm’ engages with the everyday detail of life on a rural Australian farm, while ‘Serenity Prayer’ opens

The book’s closing poem, ‘The Presence of the Trees’, again set in Australia, shows us

The last lines in this poem, and the book, are

What a fine ending for this rewarding book, where Katherine Gallagher’s life-experience has allowed the reader to share part of her journey. You know what I’m going to say now; go into that bookshop and buy your ticket.