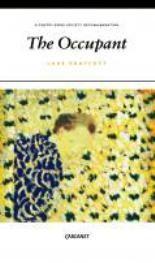 The cover illustration for Jane Draycott’s The Occupant is a detail from Vuillard’s La Porte Entr’ouverte. The palette of subtle yellows and blue-greens, the surprisingly strong mark-making, the hesitation of the figure peering in, and the title itself of the painting are all keys to this quiet collection. Jane Draycott seems to gaze at the world through a half-open door, noting unobtrusive detail and unexpected connections, as merged with her surroundings as the woman whose skin-tone so strangely matches the wallpaper behind her.

Take for instance ‘O God Who Made,’ the hymn-book title belying both form and content. The first stanza disabuses us straight away of any conventional reverence:

The visual structure is doubled already in sound – attic/lattice – and that gentle musicality continues in the rest of the verse: dank/damp/bow-lamp/embankment. But god and the canal-builders are not the only makers here: the network of canals is

so the tenderness of that painting, The Jewish Wedding, reflects back into the poet’s feeling for her city.

This is delicate writing, allusive, relying on sound as much as statement for its impact. At their best, the poems open out a fan of suggested meanings without pinpointing one. Some live in mythic landscapes, unexplained: like the sonnet ‘Prospect,’ telling us, “Anyone who wanted to could leave,” though not where nor why. The tone remains ambiguous, curiously detached:

Then the sestet changes the set-up again: “Faced with the prospect of living forever.” Really? But somehow we have already been drawn into this alternative reality. Part of that trick is the rhyme-scheme, the a and b half-rhymes almost identical: gather/river/sweaters/water, all feminine, soft, regretful, till the full stop of line eight: heart. The same rhymes are repeated in the sestet; one phrase even recurs, bringing us to the final masculine rhyme and the even more ambivalent ending:

As this suggests, Jane Draycott has a great facility with form and music, a formal range to match the range of material. Her lines stay in the mind for their quiet musicality. Occasionally this ease with form seems to lead her to foreclose too soon on the meaning, as in ‘Lost,’ her meditation on Hermione in the Winter’s Tale. Hermione’s sleep is a snowy winter, beautifully imagined, from which we know she will wake; but to these voices?

The problem of understated verse is that understatement can shade easily into mundanity. ‘Italy to Lord,’ the first poem in the collection, uses the familiar trope of the encyclopaedia and its random connections, without quite animating it with any new perceptions. In ‘The Stare,’ the moon’s “platinum stare” (a lovely accuracy) is “just letting us know/it’s there. After all, life must go on.” Hard to imagine a poem, other than satire, that could usefully incorporate that last cliché.

At its best, though, the precise imagery leads the poet to a discovery that surprises both her and her reader. In ‘Noon and No-one,’ we move from a hot deserted piazza, where the cash-machine screen is unreadable, to some new, enabling dimension:

and thence abruptly and elegantly above the whole urban scene: