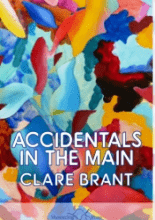 Clare Brant’s third collection for Shoestring uses a spare, minimalist approach to explore philosophical ideas through psychogeography, the effects of an urban environment on the behaviour and emotions of individuals. In an urban garden, a “Bird Box” has been installed,

The reader is left speculating as to why the birds don’t use the bird box. Is it because it’s in the wrong place, made the wrong shape or with the wrong materials, leaves any residents vulnerable to predators or because the box is a mark of human desperation? When the human homeless crisis is too big for one person to solve, humans use an open home for birds to salve their consciences and, although the birds can be freely observed, whoever put the bird box up hadn’t taken time to watch and understand the birds they thought they might help.

‘Four Horseman and Me’ attempts to provide an answer to the frequently asked question of why poets don’t write about today’s horrors,

The list of horrors comes close to cliché, which is probably deliberate, to highlight how difficult it is to write an effective poem about extreme injustice or war: such poems often become reportage or play it safe with reassuring images of evil terrorists and innocent victims. It also suggests Clare Brant feels safer writing from her own experience. Her poem ‘Dance’ focuses on watching Dominique Mercy, principal in Tanztheater Wuppertal. Here is the complete poem:

The dancer is not dancing, but flexing, preparing to dance. A dancer is rarely uncertain of the dance which must have been rehearsed so the dancer is aware of the music and the size of the stage, so the uncertainly must lie elsewhere, perhaps the audience’s reaction. The little routine in flexing hands and moving shoulders turns to a glance to a look, restoring confidence. ‘Uncertain” is repeated; but does the uncertainly lie in the dancer’s confidence of executing the dance or in the audience reaction to his dance. It feels as if the writer knows what she’s trying to say, but has assumed her readers are on the same wavelength. For me, this didn’t work. A later poem, ‘They were expensive, these lilies’ includes the lines

A simple poem about lilies becomes anthropomorphism, offering affirmative advice that could be repackaged as a social media meme. In the end I found I liked the ideas behind the poems more than the poems themselves. It was noticeable that there were no acknowledgements or publishing credits in the collection. Overall Accidentals in the Main is an interesting, thought-provoking read; however, there’s not quite enough to reward going back to re-reading the poems.

Emma Lee‘s most recent publication is “Ghosts in the Desert” (IDP, 2015) and she was co-editor for “Over Land Over Sea: poems for those seeking refuge” (Five Leaves, 2015) and “Welcome to Leicester” (Dahlia Publishing, 2016). She blogs at http://emmalee1.wordpress.com