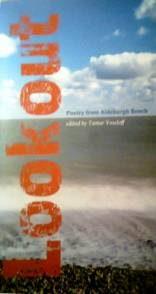 Some of the poems in this anthology about the South Lookout at Aldeburgh Beach were inspired by a night spent in residence, some arose in art-based workshops, and some came from just a visit. Each poem is presented with an introduction on its origin or inspiration by the poet. Julia Bird’s night in residence was in February, and unsurprisingly her thoughts turn to fire, in “The Boast”

There’s a mix of personal memories and observations, such as footprints in wet sand or dip and pull of each oar in serious waters the reference to beachstones, that could be common to both locations. Blake Morrison’s sequence “Flotsam” also has hints of mystery,

Its rhythm is as regular as the ebb and flow of waves. The susurus of “s” sounds could be lulling or sinister depending on a reader’s interpretation. Blake Morrison’s poem didn’t arise from a residency but he clearly knows the local coast well. Penelope Shuttle took advantage of a chance to spend an hour at the Lookout and wrote “Moth and Rain” which ends

George Szirtes’ “Howard Hodgkin Considers the Moon” resulted from a collaboration between The London Magazine and the art gallery at the Lookout.

This captures the changing effect of light and the difficulty of pinning down an image, telling how a perspective can be altered by time of day or mood. Like the poets, the artist is left to narrow down choices and pick a significant moment to turn into art. Naturally rain appears in Tamar Yoseloff’s “The Rain”

I have not been to Aldeburgh so can’t comment on the accuracy of description in the poems. I am familiar with British beach landscapes and these poems felt true. The cumulative effect of reading each in turn gave me a sense that the poets felt a deep respect for their surroundings and the power of the sea and the effects of weather. The poems work on many layers. They serve as a souvenir for those who’ve visited Aldeburgh and the poetry festival, an introduction to those who have yet to visit and a reminder of the power of communication and the balancing act of nature: sun after rain, spring after winter. What’s more, the poems are complemented by accompanying images, including views from the Lookout and of Aldeburgh beach. These add to the sense of place and impress on the reader the care that went into the presentation of this anthology. The images do not intrude on the poems but enhance them. Lookout: poetry from Aldeburgh beach is a treasure to return to and dip into.

Emma Lee‘s most recent collection is Ghosts in the Desert  (Indigo Dreams, 2015). She was co-editor for Over Land Over Sea: poems for those seeking refuge (Five Leaves, 2015) and blogs at http://emmalee1.wordpress.com