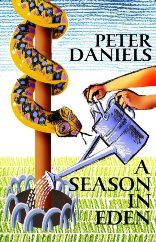 This book is advertised as a ‘second collection’, a surprise to those of us for whom Peter Daniels has been a familiar presence on the London poetry scene for many years. It turns out that the book has been compiled from several previously published pamphlets and the Acknowledgements page features a substantial list of magazines, anthologies, and competition successes. Sadly for some, his ‘obscene‘ Ballad of Captain Rigby is omitted.

Daniels may not yet be a grizzled veteran, but neither is he the sort of ‘new kid on the block’ the Poetry Establishment (whoever you imagine they are) are always desperately seeking to promote. He is not Kate Tempest or Andrew Macmillan, excellent though they are. Since some new poets or musicians often have the same sort of things to say, that is no bad thing. Daniels has enough life experience, worldly knowledge and craft skills to make this book an enjoyable read. He sets his stall out by featuring the word ‘queer‘ twice on the back cover, while the cover art, featuring a tree of life entwined by a snake, while being watered, references the book’s title. The artwork is, I think, deliberately reminiscent of a childrens’ book, which might provoke an interesting classroom discussion. (Apologies to the artist if I got this wrong).

As the title implies, the book moves through seasons, literal, personal, and emotional, covering a notional year. There is a fair amount of outdoor and landscape poetry here, although handled quite differently to the work of say, Frances Presley. We start with ‘All You Need’ with its obvious Beatles reference to ‘All You Need is Love’ (although the cynics among us might think of The Rutles ‘All You Need is Cash’). The poems opening lines are

So we are taken out of the library, the study, or the pub, and out for a bracing walk, before ending up back in Hackney, where as the narrator observes, ‘the Queen could reach me on the 73.’The next piece, ‘Faces’, takes us into Daniels’ Harry the Happy Paranoid mode; a character from his earlier work. Politics and social comment features throughout the book, for example in ‘Threshold’ – a poem of Audenesque or Orwellian ironies, where the more things change, the more they stay the same. ‘Blob Politics’ and ‘Dalston Junction’ where we are reminded that East London has been home to successive communities of incomers for a very long time, continue this theme.

There are other ‘political’ poems here, while ‘Regulars’ shows the narrator and a friend or lover being accepted in their local pub as regulars. ‘House’ explores the meanings of this term, moving from past and childhood to present, where his childhood house is accessed

This early experience is obviously important to the adult here, and for what the word ‘House’ means to him now. ‘‘Painting the House’ is a very English suburban poem, not at all Larkinesque, about what it might mean to live an ordinary life. This poem also has a religious element, one of several, such as the title poem, where the back garden is a metaphor for Eden, and stanza 3 tells us

‘God’s Power’ is a questioning poem which follows on from this, and ‘God’s Way’ finishes with ‘we trust God will find a way.’ There are one or two more enigmatic poems, but there are also poems dealing with Daniels’ identity and life as a Gay man, such as ‘French Lesson‘ where his desire for intimacy is expressed openly, or ‘Being Queer‘ whose opening line is

perhaps a rebuke to anyone who would like to reclaim ‘gay’. This is a piece of nostalgia for what I believe used to be known (and maybe still is) as ‘cottaging‘; the preceding poem is ‘Twilight Men of Southend‘ and derives from newspaper archives featuring articles from the period when Gay men had to be discreet in their activities. ‘What’ deals with the politics of identity, concluding

Yes, as long as you’re not being persecuted, or attacked by homophobic bigots. ‘A Clockwork Uncle‘ explores the paradox of family life, who we are, who we want to be, while ‘Indian Summer‘ is both seasonal, moving us through the calendar, yet at the same time, giving us a glimpse of the writer’s family origins, and then an account of moving to London, before finishing with a cameo of his present domestic life. ‘Being English’ looks into the complexities of personal, family, and religious affiliations,

Does this make Daniels a stateless person, or as Virginia Woolf, (I think*) said that as a woman, she was either stateless or a world citizen, or as someone described your reviewer, aged 14, ‘a rootless cosmopolitan’? The answer, to any civilised person, is made clear in this book, that Daniels is in some ways, not typical, certainly not ordinary, but a fine writer living a particular life in east London, sharing his insights in the poems gathered in this book. If there is a good bookshop near you, you know what to do.

Lookout: poetry from Aldeburgh Beach Anything Can Happen