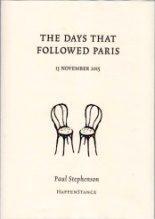 Paul Stephenson was living in Paris for three years, which included the night of 13h November 2015 when terror struck the city. A series of co-ordinated terrorist attacks plunged the city into chaos and fear. Stephenson was at home at the time but witnessed the aftermath of the event and saw how it affected the lives of ordinary people.

As a writer Stephenson took pen to paper soon after the attack in order to try and make sense of it: to put things into perspective and respond and record what he had witnessed in the behaviour of others and himself. This recollection results in a series of moving poems often examining the role that social media plays in such happenings. The first poem, ‘Safety Feature has an explanatory footnote: ‘4.1 million people in and around Paris had marked themselves safe within 24 hours of activation. 360 million people were notified that friends had been marked safe.’

The poems in this chapbook are brutally honest and seem straightforward in sentiment. However, the everyday language contrasts with the emotions embedded in the poems. Stephenson’s poems add up to a story told to remember lives that have been lost or maimed. No words can make this situation better. No words can heal emotions here. Words have to tell the story straight so that each reader is engulfed in the horror in his/her own way. That is how we deal with difficult situations: we deal with them personally, on our own level. These poems allow the reader to do this. They credit the reader with a sensibility to adjust to the story told. There are no judgements, no moral tones, no laments. In ‘Zouheir’:

Stemming The Flow’ deals with the actions of a waiter:

Stephenson address the numbness that follows being in the vicinity of a terrorist attack. How do you go about living a normal life? He confronts fears that we would all feel. In ‘The Days That Followed’

In this twenty-first century nearly all of us are suspicious. We are told to be on the alert for terrorism. There is no escape from how the world is now. It’s the truthfulness in these poems that make them so compelling to read and also in a peculiar way they are reassuring. The world is the same all over. It is all right for us to feel as we feel – suspicious, sometimes crazy with fear for loved ones.

The agony of families who have to come to terms with the fact that there is a terrorist in the family are recognised:

I found one of the most moving poems to be ‘Public Names’, which is a list of 126 names of the people killed in the attack. Some people chose not to reveal the identity of their son or daughter. I heard Stephenson read this poem and it was moving just listening to the names and I think because these people had just been a statistic to me until then.

This is a very fine collection of poems and an apt memorial to those who lost their lives in this terrorist attack in Paris. As fellow citizens we owe it to them to have this chapbook on our book shelves.