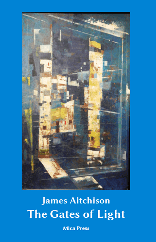 Richie McCaffery admires the honesty and masterly simplicity of poems by James Aitchison.

I’ll come straight out with it: James Aitchison is one of my favourite living poets and the arrival of The Gates of Light, Aitchison’s first collection since 2009’s Foraging: New and Selected Poems (Worple Press) is a cause for celebration, even if the themes of the book are not always celebratory in themselves. Aitchison’s poems are limpid and often lyrical, and Helena Nelson’s claim that it ‘takes a lifetime of reflective practice to write as simply as that’ is spot-on. It is certainly a ‘lifetime’ that we are made aware of in this collection, many poems demonstrating how Aitchison’s age is hanging on him heavily. We are reminded in a number of poems of a mistaken move to Cheltenham for retirement and then a move back to Scotland ‘to begin the beginning of the end’. The speaker of the poems pays close attention to what is happening in the garden, acutely aware that some of the trees around him will only fruit after his death and others, being cut down along the street, ‘might have outlived me for centuries’. There are sometimes sobering glimpsesof the poet stepping out of himself to look at what he has become in old age:

There is something appealing about Aitchison’s modest, and at times self-deprecating, approach to his craft; he simply gets on with the quiet business of writing poetry and does not pay any heed to the background noise of what else is going on in the poetry world or its pecking orders. I say ‘quiet business’ because Aitchison would have us believe he leads a rather reclusive and desk-centred existence, where he writes more than he speaks, in his bungalow in Stirling with a half-acre garden to care for, which he potters about in and writes the occasional poem about. While this is physically true, these poems show that Aitchison is moving and travelling restlessly in a neural / cerebral sense and he even admits that ‘contentment is despair wrapped up in love’ (‘Cold Calling’). The collection’s title The Gates of Light manages to combine the central themes of the book perfectly: the threshold between life and death, the material gates and the intangible light. Certain poems show a contented side of Aitchison whereas others show how he is very much not at peace with the world, using poetry as a means to air his grievances about things such as big charities, sexism, religion and class / social inequality. On the latter issue, Aitchison is particularly vocal. ‘Tracy’s on Suicide Watch’ is a poem about a mother who has been jailed at Cornton Vale (outside Stirling) for stealing a pair of shoes. Tracy does not have friends in high places so she is punished severely for what is essentially a venial crime while the ‘fraudsters in conglomerates’ get away with it:

There is a sense that Aitchison is often castigating himself for his good fortune and seeming passivity. The poems show that as a young man, Aitchison worked as a teacher in Africa and while he saw suffering and corruption first-hand, he must now see it at a distance on the TV and all he can do is send a cheque or write a poem:

One of the most striking strands of the collection is its treatment of class. In ‘Little People’ Aitchison reminds us that it is the ‘little people’ who have to pay ‘the maintenance of palaces’ but there is a recurrent, underlying guilt to everything Aitchison writes on this matter. He knows that he now occupies a comfortably-off, middle-class existence and in certain moods feels this is a betrayal of his much humbler background. In ‘Estate’ Aitchison deals with the early death of his father, brought on by his gruelling work and which ‘cauterized’ a ‘bit of my boyhood brain’. He left no will, but then he had ‘no money, no property’. Aitchison has ‘his genes’ and so inherits his estate which he invests into poetry. In ‘I Remember Tin-Bath Wallace Street’ Aitchison guiltily compares the poverty of his parents’ house with his spacious bungalow and the relative affluence of his life with the grinding hardships of theirs: ‘My free school dinners were bought with my father’s life’. ‘A Fit Country for Heroes’ takes issue with David Lloyd George’s assertion that Britain would be ‘a fit country for heroes to live in’, when in fact the lower-classes were simply used as anonymous cannon-fodder and the dead became the heroes, reminding us of Brecht’s point (I paraphrase) that ‘unhappy is the land that needs a hero’:

Aitchison’s is a survivor’s guilt in a way; that he has outlived his parents by a long way and lives in such comfort, and is able to write poems in praise of nature in his leisure time. His intellectualism is problematized by his knowledge and experience of post-War working class life. In ‘Smog’ he describes going up to the university in Glasgow and breathing in smog and going home at night to clean sheets and shirts and how ‘I knew then I could never repay the debt’. In ‘Riveting’ he compares shipbuilding on the Clyde with his work in the lecture halls of Glasgow University, where the war poet Alexander Scott M.C. is giving a lecture on Dunbar, whose most famous line is ‘timor mortis conturbat me’ (death disturbs me):

One small criticism of this collection is that, at 80 pages, it is nearly twice the size of some poetry collections and there are a few lesser poems that could have been excised to emphasise the impact of other, stronger ones. Given its length, it is hard to follow up on the many themes it deals with in any detail. One strand worth exploring is found in the poems, such as ‘Pheasants and Other Words’ which deal with Aitchison’s aphasia (the inability to recall certain words) as there seems to be a parallel between this and the act of struggling to write poetry. But when he talks about different states of being and living on physical and neural planes, between reality and dream, the reader is immediately reminded of the very conflicted poetry of Edwin Muir, on whom Aitchison wrote a study in 1988 (The Golden Harvester). Aitchison, like Muir, has a strong social conscience as well as consciousness, and tries to make sense of his place, past and future. From his desk he sometimes acts like an auspex; making divinations about humankind through the patterns of birds in his garden. He even admits that ‘A swift-scream in my head / is more astonishing than headline news’ but as much as he wishes to retreat from the world, its troubles and concerns inevitably draw him in and it is that poetry of uncertainty, dilemma and ‘discontent’ (like the pilgrim who begins, travels and ends in ‘discontent’ in ‘To Be a Pilgrim’) that makes The Gates of Light a remarkable collection.