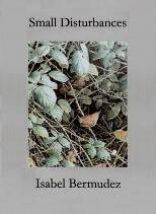 Small Disturbances tells a big story through small focuses, as if tracing a family tree through a mix of records, keepsakes and treasures, letting the smaller things provide hints and clues to a reader who is free to take them at face value or to build up the story behind them, finding links and connections as the collection of objects gets bigger. The technique is explained in the poem, “Under Kew railway bridge,”

Although rooted in England, some of the poems look back to the poet’s Columbian heritage. In “Sonetos” about a grandmother,

The sound patterns and part rhyme as “drift” is echoed in “left” is picked up in the final couplet with “bones” and “Illusiones” suggestive of not just the loss of a grandmother but also the opportunity to quiz her about the relic of a poem. If there is a poetic gene, did the granddaughter inherit it from her grandmother? There’s another lucky find in the poem “The winter hives” which gives the collection its title,

Birds feature in many of the poems: they can be a symbol of freedom, portents or messengers. Readers meet herons, an egret blown from its Norfolk home,/ he’s dreaming now, and Red of the gold-finches/ the sparrows’ dun colour (“Autumn”). In “January, Mortlake” as winter slowly gives way to spring, we see white gulls on the river that suddenly have the look of new souls. However Isabel Bermudez can also turn her focus on humanity, in “Real life” the poet ponders over her predecessor in a teaching job, who

It’s easier to mock rather than help him, easier to blame a newly qualified teacher with little experience rather than question why the students are unruly and the existing staff fail to appreciate their behaviour is alienating the newcomer who begins to identify with her predecessor. “Small Disturbances” is a gentle, well-crafted collection that carries its weight very lightly.