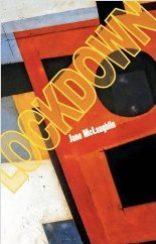 Lockdown does not feel like a first collection. While it has the hallmarks of many debuts – heft (a very substantial 53 poems, many in well-sustained sequences), variety and plentiful ambition – these things can almost be taken for granted as something larger and darker moves through the book, marking it out as different. There are many fine historical pieces (‘The Settler’, ‘The Necessaire of the Empress Josephine’, ‘Crossings’) which add range and spice to the book as it develops; technical poems (‘Extreme Deep Field’, ‘How to Make a Cloud’) demonstrating a breadth of intellectual interest; and miniature travelogues (‘Tamil Taxi’, ‘Two Scoops’) which explore aspects of other cultures alongside their expressions in the UK. None is unremarkable, and all are carried off with deftness and brio. But the bulk of the collection insists on a more troubling theme.

It is fascinated, for instance, by the dividing properties of glass. This image appears first as a troubling line between the prosperous and the poor in ‘Corner Shop’:

Here the glass permits a view from one side of the economic divide to the other, a gaze going both ways and appearing both positive and negative depending on which side is doing the looking. (The shopkeeper opens up as much from social pressure as compassion, with the translucence that has jolted his actions a spur to both individual and social action.) The image appears again in ‘Guruji’, this time not so much a visual thing but an aural one, allowing neighbours to remark rather bitterly on the sudden curtailing of their cultural voyeurism:

But it is in the title poem, a short and brutal meditation on the inescapability of violence (done to body, society and psyche) in the bullish world of modern consumerism, that the image is most revealing:

That light itself – almost a stand-in for glass in its ubiquity, its seeming beneficence – is empowered in such a physical way, lending a helping hand to the nastiness of the scene, and underlines the tremendous force of McLaughlin’s metaphor of division. It bubbles through the book like swamp gas, drips between the floorboards like blood. Even in the most lyrical pieces, the sense of the work rising from an irredeemably fractured society jumps off the page, juxtaposing the wider themes with its own brute truth.

In ‘Coming Ashore at Halifax’, the book’s ten-part masterpiece, we are taken on a landscape journey through the physical departure points of the Titanic victims, each section affirming bright notes of hope and beauty, then finding dark glassy depths:

It is almost the undercurrent of the book writ large. From the “enormous ice-hearts” of icebergs, beating slower than the seasons, to tiny details of humanity observed just prior to disaster (“they noticed whiskers form about the lights … fine frost-drawn needles … frozen lashes around an eye”), the sequence at once acknowledges the enduring power of life and sings its opposite, finding, perhaps, even greater lyricism in the end of things:

It is fitting that the sequence concludes with something enduring (‘Stone’, the “granite cut with diamond wheels” of the passengers’ tombstones) as the sequence itself will endure. The final stanzas affirm the lasting nature of a number of qualities – memory, respect, endurance – and offer an interesting contrast to the image of glass running through the book. Here something equally clean and polished does not divide but connects us, in shared humanity, against the harsh realities of the world:

It is telling that we are able to evade what the poet in a later poem calls “heartless normality” only through death, and this might seem to mark the book out as negative or gloomy. However, that is never the case. There are poems with delightful conceits (‘Piano’, in which a rejected instrument is gradually reclaimed by nature, or ‘Scylla’s Workshop’, which sees participants eventually submerged, still scribbling, beneath the waves) and many others that tackle light-hearted subjects. But still the central theme pushes to the fore, and is more powerful for it. We know that such a preoccupation will not let the poet go, and can look forward to how well she deals with it in future collections.