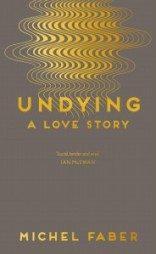 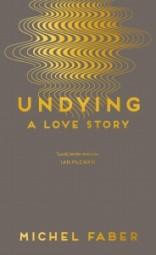 Not since Ted Hughes’ Birthday Letters or Douglas Dunn’s Elegies has there been such an evocative series of poems about a dead wife. Hughes was looking back over a tumultuous relationship, but Douglas Dunn was, like Michel Faber, dealing with the grief of losing a wife to cancer. Michel Faber, better known as a novelist, shows himself here to be a fine poet, too.

Michel Faber’s wife, Eva, died in 2014 from bone-marrow cancer, a protracted and painful death. The 68 poems in Undying concern the agony of watching a beloved person die, the bittersweet memories of happy times without foreknowledge, and the aftermath, day after day of her absence when ‘all spaces are vacancies’.

The interplay of memory and projection creates a vivid impression of a bereft husband dealing first with the devastation of his beautiful wife’s decline into ugliness and death and then the emptiness of his life without her. Faber is matter-of-fact about his pain and the way it emerges in even apparently trivial matters following Eva’s death. If this sounds impossibly depressing, it is not. Undying is about a protracted painful experience, but described in an arresting manner that raises the horror into art.

Although the series of poems begins as Eva is in the last stages of dying, we gradually glean a larger story of their lives together—a wedding in Sopot; her indefatigable dancing and his disinclination for it; her serious photography; her beauty and his devotion to her; anecdotes of their travels together.

The poems are mostly free verse, but with a skilful placement of rhymes (including internal rhymes) that often finishes off a stanza with a neat closure. Michel Faber tells us that he once worked as a nurse, and so medical terminology comes tripping off the pen. In ‘Remission’ the couple celebrate at a Thai restaurant after getting good news. ‘The waitress pours your jasmine tea / because your neutrophils are 3’.

But most of the poems are not so happily upbeat. In ‘Your Ashes’ the poet carries the canister in a shopping bag along a city street where other people carry ‘bags like mine / containing bottles of spirits / lighter than your remains’. There is the inevitable problem of disposing of the deceased’s possessions. ‘You bought too may wigs’ begins one poem. ‘Too sad to keep. / Too intimate to sell’.

Even snowflakes are significant. ‘Each year we saw them come. / Each year, we knew we’d be here when / they’d gone’. They were ‘specks of wetness in your hair’. But now it’s Eva who is ephemeral: ‘So tentatively there, / so insubstantial in the air / that the snowflakes fall right through you’.

Seeing a doddery old couple sharing a shortbread on the train in ‘Well, We Made It’. Faber speculates, ‘My love, had you not died / but lived another twenty, thirty years, / these two old dears might have been us’.  They too would have been old and doddery and shadows of their former selves. ‘How sweet – as sweet as shortbread on my tongue – / to earn the pity of the young’.

Anyone who has outlived a loved one will understand Michel Faber’s reactions after his wife’s death—noticing certain things simply because she would have noticed them and noticing other things because they would never share them.      The paradox of a book about grief and death is that for all its unpleasant subject matter, it is not an unpleasant experience to read it. On the contrary, it expands our knowledge of human experience and our capacity for empathy. We experience vicariously the sensitivity of a poet grappling with a human rite of passage.