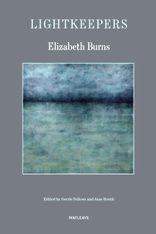 This is Elizabeth Burns’ last volume, edited by two friends after her early death; I understand that she had been suffering from cancer for several years. The opening poem looks at her ordeal without self-pity:

A great many of these poems are about creating peaceful spaces – listening to Bach in the kitchen, moulding pottery, contemplating the flower paintings of Winifred Nicholson. They are likely to have a special appeal for women, whose experiences, as housewives and mothers, have for so long been considered trivial. Burns treasures ‘commonplace’ objects like a basket of eggs, an old battered dresser, cloths sewn by female ancestors, her grandmother’s copy of Little Women: A Story for Girls. That particular book is valuable not because it is very good but because it affirms the bond between mothers, daughters and sisters, and demonstrates that ‘even girls’ can write. She isn’t an aggressive feminist. But in ‘The hours’ she wishes that Burne-Jones’ soulful women would step off the canvas, cease to be men’s muses and do something, anything interesting.

Looking at an old issue of The Interpreter’s House, where I published some of her poems, I recall how ‘In the butterfly house’, winner of the 2005 Myeloma Awareness competition, celebrates a group of children who are ‘learning the creative life …. waiting for the idea …. for the notes to sound pure, for the colour to be perfect’. ‘Lightkeepers’, the lovely title poem of this collection, affirms that each person has a ‘fiery, unquenchable self’. And Burns thinks it important that each spark of fire should be cherished and that we should look for meaning and value in ordinary lives:

This is a collection full of marvellous poems: ‘A revolution’, which points out that you can’t just abolish the past; poems about the Brontes; about paintings (with special reference to women in the Bible stories); about anonymous craftsmen (‘The hare’). But I am especially haunted by one from an earlier collection, ‘The Brightest Star’, about the astronomer Henrietta Swan Leavitt, who also died in her fifties and is half-forgotten:

This was written some years ago, but it’s an uncanny parallel. I am left with the feeling that here is a great poet, who has gone too soon, and whom I didn’t sufficiently value when she was alive.