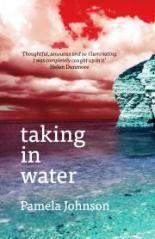 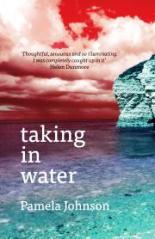 This is a book full of reminders of human vulnerability – both to sudden major disasters such as  the (now largely forgotten) East Coast floods of 1953 and the destruction of of the Twin Towers in 2001 and also to slower physical threats like coastal erosion or the emotional dangers of recovering lost memories  of painful events.

The book’s central character is reclusive artist, Lydia.  By an unfortunate (but narratively convenient) coincidence, she is approached, within the space of a couple of days, by two men who, in different ways, threaten her settled way of life in an isolated house overlooking the North Sea.  Steven works for an environmental agency and he brings a warning that an imminent survey of the unstable cliffs may result in Lydia’s house being declared unsafe.  Martin is an art historian who wants to question Lydia about her involvement with a celebrated performance artist forty years ago, when she was only a teenager.  (Martin is at this stage unaware that the performance piece Lydia appeared in was inspired by a tragic incident in her childhood when her parents were drowned in a flash flood.)  Lydia’s first instinct is to send both visitors away and be as unhelpful as possible.  But after some reflection she chooses to enter uneasy and cautious negotiations with both of them and, by doing so, she starts a journey of self-discovery and re-appraisal.  To a lesser extent Steven and Martin are also changed by finding out things about themselves.

After a slightly slow start while Johnson establishes her characters – and there is an important  supporting cast alongside the main protagonists already mentioned – the narrative becomes much more engaging once Lydia’s interplay with Martin and Steven gets properly under way.  We watch Martin’s academic excitement as he finds out the artistic relevance of traumatic episodes in Lydia’s past; but we also realise that Lydia is letting herself come closer to confronting memories that she has largely suppressed.   Steven’s relationship with Lydia is initially a technical and professional one; but as time passes we observe him beginning to struggle to temper professionalism with sympathy for a woman who may be about to lose her home.

Johnson has cleverly provided each of her principals with a confidante who is slightly outside the main story: Lydia has an old school friend; Martin is staying temporarily with his slightly hypochondriac mother; and Steven works under a rather unsympathetic boss.  It is in conversations with these secondary characters that we get interesting glimpses of the developing attitudes and insights of the leading players as their encounters get closer and closer to uncomfortable truths.

The narrative proceeds at a good pace and retains the reader’s interest in the two parallel – and largely independent – strands.  The scenes are well set and the dialogue mostly rings true. Events unfold in a believable way – as do the characters’ reactions to them.  The book avoids offering anything ‘too neat’ in the way of resolutions to the challenges that Lydia is faced with.   And if one of the eventual outcomes did seem to have been telegraphed a long way in advance this was more than balanced by the genuinely surprising solution to the mystery wrapped up in the 1960s performance piece that was the origin of Martin’s investigation.  Once I had been drawn in by the story, this was a book I was reluctant to put down.