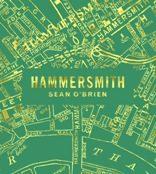 This handsome, signed limited edition represents a selection from an ongoing long poem by Sean O’Brien, the parts published here possibly written at the same time as the poems in his other current book, The Beautiful Librarians, (Picador, 2015). Martin Crucefix, in a review elsewhere, describes Hammersmith as ‘a chapbook’, a term our American cousins use for a pamphlet. For my money, a pamphlet is a small, stapled production of say 24 or 32 pp. while what we have here, though the size of a CD case, is 48 pp. and has a spine, therefore meeting the legal definition of a book. The size, of course, means that it could make a fine seasonal or personal gift. It also has an attractive green & gold cover. As well as two cantos from the ongoing eponymous work, the book features a selection of monochrome photographs taken in and around Hammersmith and credited to O’Brien.

Readers of O’Brien’s early books will recall the persona of ‘Ryan’ who might or might not have any relation to either O’Brien or anyone he knew back then. Whether Ryan is a doppelgänger of the writer, or where the ‘Mulligan’ referred to in the Foreword came from, can be left to other reviewers in say Poetry Review or the TLS. Your unreliable reviewer has a memory of O’Brien saying something like ‘Ryan has exhausted his roster of possible outings.’ Anyone mentioning ‘stately, plump, Buck Mulligan’ from the opening of James Joyce’s Ulysses, and his parody of the Mass, deserves whatever comes their way next. However, the politics of identity, notably the working class loss of cultural identity and sense of history, feature in O’Brien’s text; and the re-negotiations of Irish identity – with the implied or openly stated rebuke to De Valera’s version or vision of post-Independence Ireland – cannot be ignored here. Critiques of writers of Irish ancestry, not actually living or born in Ireland, who choose to write on ‘Irish’ subject matter, have been stringent, so that subject can be left for another day. We might inquire, however, what relation ‘Ryan’ could have to Ken Smith’s Fox character in his long poem ‘Fox Running’ or Barry MacSweeney’s ‘Ranter’. Ryan is though, an outsider, rather than an Everyman.

One of the themes explored here is the nature & purpose of memory, personal, familial and cultural; if our parents or grandparents won’t or can’t discuss family events with their children, how can we know who and why we are? (There is a Kathleen Jamie poem in her first book which your reviewer remembers but does not have to hand, on this subject, which deals very well with parental reticence in working class households.) In the Foreword, O’Brien discusses this issue, stating that while other family members are engaged in historical & genealogical research, he would rather write poems. On p.13, he describes this book as ‘a work of the imagination’ and ‘a dream’. As in some of O’Brien’s other writing, Wallace Stevens would appear to be a presiding spirit. The Foreword, as noted, not only refers to Ryan, but also to ‘an indigent, long-dead poet called Mulligan, who passes through the text in some later cantos.’ He means cantos which might appear in a later publication.

This ‘condition of England‘ trope, and in this case, extended metaphor, is familiar territory for O’Brien, and anyone who knows his work. So a first question is – can O’Brien sustain his, and the reader’s interest over what he says on p.16, is a poem of ‘several hundred lines’ and counting? This work has evidently been under way & ongoing for some time; and as noted above, may overlap with The Beautiful Librarians, where one piece, ‘The Lost of England’ (also in Dantesque triplets) starts ‘Forgive me, England’ and goes on to feature two recurrent tropes in his work, train journeys, and the less attractive parts of academic duty, essay & exam script marking. Anyone suggesting that Professor O’Brien should ‘get a proper job’ if he dislikes academic life, students, & libraries, would no doubt told that there are no ‘proper jobs‘ in England anymore. It could also be pointed out that any resentments that might be apparent in his poems are entirely justified, and in any case, these poems are voiced by a persona with little relation to the actually existing Sean O’Brien.

O’Brien’s gift for observation and phrasemaking are put to good use as ever, and the triplet form is well suited to a long poem that, like the Thames from rural Oxford to the Thames Estuary, keeps moving, and can contain anything. This is a richly allusive text, with Palinarus, the helmsman in Vergil’s Aeneid, introduced early. High culture and popular culture are entwined here, with Richard Widmark’s classic film noir, Night and the City, which is described as ‘that love song/ To Water and terror and death’ featuring early on. O’Brien moves on to a consideration of the Hammersmith that might have existed before he was born,

The next passage, in which six stanzas and one subsequent line are in italics, starts

‘Nor am I out of it’ is borrowed from Marlowe’s Faustus, where Faustus & Mephistopheles debate theology. So we have a narrator embedded in the text, theological debate, illusion as reality, contemporary England as a sort of Hell, England as an endless reality TV show. Has the sun ever shone in an O’Brien poem?

The next section reads

Is this Ryan as O’Brien, or O’Brien ventriloquizing his father? And which speaker says ‘Oh, loneliness, your name is Hammersmith’? After this, the poem moves on, noting that the post-War England is gone now. Mention of Nigel Farage and Brexit is not thought necessary. O’Brien (or Ryan) locates the moment of change, ironically after the victory in World War 2, and the founding of the NHS, with ‘the cold coming of the immigrant ships’, a nod to T.S.Eliot’s ‘Coming of the Magi’, and references Harold Macmillan’s ‘Wind of Change‘ speech, delivered in Cape Town in February 1960. This is typical of the range of allusion in the poem, tribute to his memory, and to profitable time spent in libraries. Canto 11 also uses the impersonal ‘you‘, starting

The sense of not belonging or unbelonging, and the familiar trope of ‘No blacks and no dogs and no Irish‘ is put to good effect; O’Brien does not need to point out exactly who staffed the new NHS, and the expanding local authorities in London and elsewhere. Ryan puts in another appearance after encounters in Hammersmith Palais, or some other local dance hall, the narrator asking

Ontological uncertainly might well be Ryan’s stock in trade, self-awareness possibly not. This Hammersmith, like so much of the notional England O’Brien observes unsparingly.is a place where either nothing happens, or things happen elsewhere, possibly in Fulham or Chiswick. This Hammersmith is dusty, cold, boarded up, and mimes ‘the ends of the earth’. O’Brien has explored this territory before, and no doubt will do so again. If we are not on a ghost train trundling past ghost stations, every avenue lead down to cold dark water, and the ferryman awaits. However, poetry (or literature) appears to have no redemptive power; one stanza finishes ‘So Ryan reads poems. Who gives a fuck?’

This canto concludes with five stanzas addressing both Ryan and the reader, the first of which reads

Given as previously mentioned, O’Brien’s attitudes to libraries, students, residential writing courses, & much else besides, this could cover a multitude of sinners. (I have no idea who he could possibly be thinking of). The Dantesque triplets are wholly appropriate to the tone & tenor of this rhetorical address, which appears to treat post-War England in general, and literature in particular, as a type of Dantean Purgatorio, rather than a possible Paradiso, to be endured at best. As ever, O’Brien’s work is thought-provoking, and worth careful attention. Where Canto 111 might lead us is something I look forward to learning.

Taking in Water Be with me, it’s C